Based on a book by Richard Paul Evans, The Christmas Box is the kind of lovely movie that many people will love to watch in the winter months. Not me though. It wasn't unbearable, mainly thanks to the cast, but it was all just too cloying and manipulative and predictable. Yes, I am well aware that such things could be said of almost every Christmas movie ever made.

Richard Thomas, Annette O'Toole and Kelsey Mulrooney play a family who take a job that involves them moving in to the large home of Mrs. Parkin (Maureen O'Hara). Thomas is a hard-working father who doesn't get to spend much quality time with his family as he strives to make his business more and more successful, something that is duly noted by O'Hara. The pair don't seem to get along at all, but it eventually becomes clear that the lady of the house has an agenda, one that doesn't come from a bad place.

Ironically, this is a film that may well set your teeth on edge like the overly familiar tune emanating from a once-beloved jewellery box. The music, the lethargic camerawork, the horrible way in which it presupposes that the values it manipulates to show negatively are values always to be discarded in favour of, y'know, love and constant reassurance. The character played by Thomas is far from a monster, but you're expected to think worse of him because he's spending a bit too much time working towards a goal. Hey, balance is always better, but I'm not going to throw eggs at every person who occasionally gets it wrong (including myself).

I'm not sure if the book is so irritating, perhaps the screenplay by Greg Taylor ended up exacerbating the flaws, yet I AM sure that the final result isn't something I'll ever be returning to. Director Marcus Cole is happy enough to keep the whole thing feeling like a daytime soap-opera, although he's really hampered by the script/source material that ensures character developments are forced, rather than organically created, by the events.

Thomas and O'Toole do as well as they can with their roles, even if they're not required to show any range or depth, and young Mulrooney is a pleasant enough child actress who doesn't ever get too irritating, which is always a bonus. Yet it's O'Hara who really brings this up a notch. She's not asked to do anything special. She just seems to be the only one who comes close to having any fun (a perk of the character that she's playing).

If this movie was a Christmas card then it would be one of those dull pictures showing a roaring fire with a stocking or two hanging from the mantelpiece. No, not even that. It would be one that has a picture of baubles on the front. Those cards that you always leave until every other card has been sent out, the ones that you end up using for the people you forgot about until the very last minute. Yes, this is one of those. Well-intentioned, but still a bit rubbish and lacking any sense of fun. 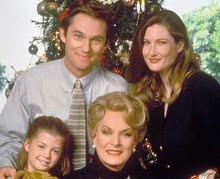