Bill Paterson stars as a radio host, Alan "Dickie" Bird, who isn't having a very good Christmas in this gentle comedy from writer-director Bill Forsyth. Alan has just been ditched by his girlfriend (Eleanor David), he's feeling pretty low, and then he gets caught up in the middle of a strange attack on an ice cream van while simply buying a cone for himself. This incident leads to him becoming involved in the middle of an "ice cream war" between Trevor (Alex Norton) and Mr. McCool (Roberto Bernardi), relaying coded messages through his radio show that makes his employer (Rikki Fulton) start to worry about his sanity.

If you've seen both Gregory's Girl and Local Hero then you'll be familiar with the way Forsyth likes to approach his material. Unfirtunately, this film isn't as good as either of those movies, but it's still enjoyable enough. It just runs the risk of being so low-key and light that it could blow away, like a dandelion in a strong breeze. Most of the humour is derived from the fact that the people involved in this "war" take it so seriously, despite the fact that it's just about ice cream, and Paterson is the outsider looking in on the whole thing. It's also worth noting, for anyone who doesn't know, that the movie is loosely based on some running turf wars in Glasgow that WERE dubbed "The Glasgow Ice Cream Wars". That situaton wasn't as pleasant, but Forsyth does well in transforming it and making everything more palatable while still being able to point at the underlying ridiculousness of any business competition that escalates to such extremes.

Paterson is very good in the lead role, initially watching events unfold with sheer bemusement before deciding to take a more pro-active stance. He also has a great voice for radio, making him all the more believable in the role. Norton and Bernardi are both fine as the warring rivals, Fulton is as wryly amusing as usual, and Clare Grogan has a small role, catching Paterson's eye and inevitably dragging him into the whole mess. David is also very good, albeit not in the film for that long, and Patrick Malahide does well as Colin, a friend who just wants Alan to move on with his life after a break-up that he assumes must feel pretty sore.

There's another great soundtrack supplied by Mark Knopfler, a great running gag about a car constantly being damaged, and a final act that feels as logical as it is amusing. There are also a few unnecessary dream sequences, one bizarrely awkward conversation between Alan and Colin about Colin's young daughter, and the feeling that every scene has space for some more humour to be added. I'm not JUST creating a clumsy analogy by saying that it's almost like receiving an ice cream cone with only half a scoop sitting on the top. Well, okay, maybe I am. 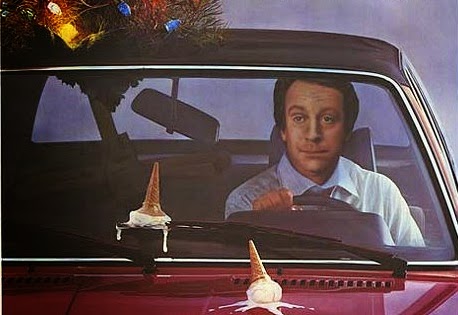 Here is the regular plug for my e-book, that has almost every review I've written over the past 5 years. It's very reasonably priced for the sheer amount of content.