You could easily watch Elves and end up in a very bad mood indeed. It's incompetent, ridiculous, full of hilariously bad dialogue, and isn't helped by a lack of blood and gore. Yet, those things made me love it. I was hooked within the first couple of scenes, and then this thing just kept delivering me gift after gift. Oh yes, I realise the irony in that statement.

If I described the full plot of this movie to you then you would assume that I'd been drinking too much mulled wine. Let me just say that there's a dangerous elf on the loose, as you may have surmised already (although there's only one elf actually up to no good, despite the title). There's a man (Dan Haggerty) who gets to play detective after a very short stint as a mall Santa. And one young woman (Kirsten, played by Julie Austin) has to put up with a pervy young brother (Willy, played by Christopher Graham), a spiteful mother (Deanna Lund) and an elderly relative (Borah Silver) who seems to have last seen sanity a long, long time ago. Those are the basics. I'm serious. There's so much more to enjoy here, and I'm not going to spoil it for anyone.

Of course, judged by the usual movies standards this is complete trash. But when you weigh up the sheer amount of fun onscreen, pound for pound, this comes out way ahead of many more prestigious movies. I doubt that any of the good stuff here was intentional, but I don't care.

Writer-director Jeffrey Mandel doesn't have too many other movies to his credit, funnily enough. I'm not going to rush out to see his other work, simply because I doubt he ever bettered this particular gem. I thought that the movie had peaked early when Willy shouted at his sister: "Yeah, you've got fucking big tits and I'm going to tell everybody I saw them." I was wrong. It just got better and better from then on, with highlights including a mall Santa (NOT Haggerty, I hasten to add) obsessed with oral, a connection to some nasty Nazis, and a horrible scene that shows a cat being bagged and drowned. Animal lovers will want to avoid that moment, of course, but - bear with me here - it's actually quite amusing in how ridiculous and sudden it is. And I'm sure that no animals were harmed in the making of the movie. Most of the damage would be to the pride of those involved.

Getting to the technical side of things, the picture is often dark and murky, although it's worth noting that this is a film not given any decent treatment since its VHS release about 25 years ago. There are also inconsistencies in sound levels when conversations take place between people who have been filmed from different angles, and a selection of other, minor errors showing that Mandel didn't always have quality control at the top of his list of priorities.

Austin isn't actually that bad in her role, even when delivering lines like "Yeah, well, I had a rough day at work... Santa got murdered." Haggerty isn't great, but he's okay when compared to the wild overacting from Lund and Silver, who are both entertainingly ridiculous in every scene they have. Graham may not have much screentime, but he certainly makes an impression thanks to that opening argument with his sister that reveals his voyeuristic nature and his foul mouth. Mansell Rivers-Bland is a comical Nazi threat, and Laura Lichstein and Stacey Dye are a couple of young women who also end up endangered by the evil elf.

Don't watch Elves if you want to see something that strives for quality and a polished finish. Do watch it if you want a whole lotta fun. Two wrongs may not make a right, but in movie terms it can often take many negatives to create something positive. Which is the case here.

Buy something . . . . somewhere, but watch Elves here just now - https://www.youtube.com/watch?v=QiDKup32jGY - until it gets a DVD release. 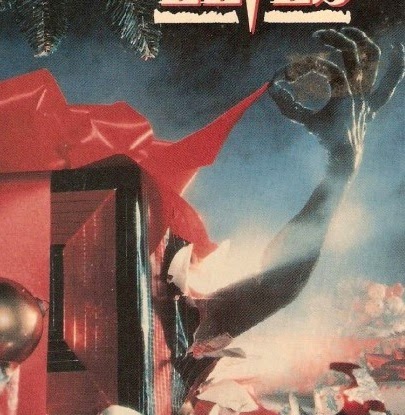