There are many ways in which the differences between American comedy and British comedy can be categorised. The two styles have moments when they grow closer, and even intertwine, but it's often the case that they can be given the following stereotype labels: American comedy is brash and loud, often wanting to make things larger than life (literally when you look at the many overweight people who have tickled the collective U.S. funnybone), while British comedy is full of wit, irony, and a more subtle approach. Of course, it's possible to pick prime examples from either side of the pond that absolutely contradict these generalisations, and it's possible to pick examples that adhere to them perfectly. You can't tar everything with the same brush, BUT there's certainly a tendency for either territory to aim for the respective favoured style, as it's commonly (mis)perceived.

And I've said all of that just to set the scene for Ernest Saves Christmas. You see, Ernest is a comic creation who certainly goes for the loud and brash approach. Brought to life by Jim Varney, he's a well-intentioned fool, often yapping on to whoever happens to be in earshot while he causes havoc around him.

In this particular adventure, Ernest ends up with Santa (Douglas Seale) in the back of his cab. He also picks up a young girl (Harmony, played by Noelle Parker) who is trying to live on the streets with only her wits to help her. After some confusion over money, Santa ends up on his way without having paid his taxi fare, Ernest is fired from his job, and it turns out that in the back of the cab there sits . . . . . . . a fancy red sack. It takes a while for Ernest and Harmony to put two and two together, which gives Santa time to get himself in trouble as he contacts the man (Oliver Clark) he wants to be his replacement.

A lot of your reaction to Ernest Saves Christmas will depend on how you react to the main character. I wasn't entirely won over. Varney is fun, he can certainly move between dim-witted slowness to manic, nervous energy with ease, but I soon found the constant chatter and occasional impressions to be a little grating. Mind you, when he transforms himself on a couple of different occasions then I admit that I found myself smiling a bit more, having as much fun as Varney seemed to be having during his moments of "freedom" from the central character.

Director John R. Cherry III keeps things ticking over nicely, if unspectacularly, and the script (by B. Kline and Ed Turner) throws in everything that you'd expect, and want, from such a film. Santa being treated like a confused old man is a common trope, elves coming along to help is another, and nobody should be surprised by the attempts at heart-warming moments in the third act. But few other movies, if any, show the problems that can be caused by flying reindeer stuck in customs. This, and the other genuinely amusing moments sprinkled throughout, make the film worth a watch.

Oh, I should really mention the rest of the cast. Seale is a decent Santa, which is important, Parker is likable enough, even when she strays from the path that everyone wants her to take, and Clark is solid. Robert Lesser is great as Marty, an agent looking after Clark's character, and Gailard Sartain and Bill Byrge are both a lot of fun as the two men who find themselves with a surprisingly light-footed herd of reindeer. Billie Bird also has a small role, and is as delightful as always.

I'm sure that most kids will enjoy this, and it's also far from the worst of oh-so-many Christmas movies that you could choose from. I just didn't love it. 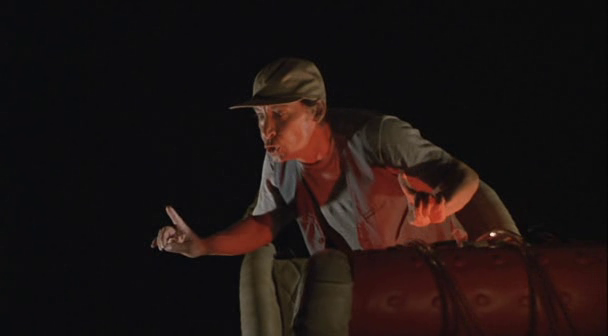 MERRY CHRISTMAS. You know how you can show your appreciation for bloggers? If you share and share then every additional reader helps. Connect through Google or Blogger or any way you can, and rest easy in the knowledge that you've made little ol' me a very happy man.

And if you're wondering what to do with some of those Amazon vouchers that Santa may have brought you . . . . . . . you could also buy my e-book, that has almost every review I've written over the past 5 years. It's very reasonably priced for the sheer amount of content.