I just don't understand it. I'm easily pleased, I'm often about as easily pleased as you can get, and yet there are still movies that come along that get my rage rising from almost the very first scene, despite having the resources available to do better. The worst thing for a movie to do is be dull, but it's also terrible when a film feels lazy, and gives the sense that viewers aren't being treated with anything other than disdain. As is the case with One Starry Christmas.

Sarah Carter plays Holly Jensen, a young woman (and astronomer, hence the title) who heads back to visit her folks for Christmas, also hoping to surprise her potential fiance (Paul Popowich). She ends up sitting on a bus alongside a genuine cowboy type (Damon Runyan), which proves fortunate when the bus breaks down and Mr. Gentleman Cowboy helps her out. To repay the favour, she ends up inviting him for a bite to eat with her folks, who then end up inviting him to Christmas dinner, insisting that he also brings along his brother. The potential fiance isn't too happy about this, but that's okay because he's a bit of a douchebag anyway. Sort of. Well, the movie needs to paint him that way to lead everyone to a predictable final act.

Rickie Castaneda is the man responsible for this weak script, one that alternates between Christmas cliches and cowboy cliches (of course he has great manners, and of course he opts to show everyone how to line dance when the opportunity arises). Director John Bradshaw does nothing to distract from the horrible material, presenting everything in a flat, plain manner that seems to show a complete lack of imagination/interest.

Carter, Popowich and Runyan all try to do something decent, I suppose, with what they're given, but none of them make a great impression. Actually, I'm telling a small lie there because I spent a lot of the movie considering just how much time Popowich spent bemoaning the fact that he would always be "the guy who looks like Paul Rudd, but isn't Paul Rudd". Kathleen Laskey and Neil Crone do better, however, in the role of Holly's parents. Both believe in a very romantic idea of love, although the former is more open and vocal about it while the latter sometimes hides behind humour to tease more of a reaction from his wife. George Canyon gets to join Runyan in the "who can be stuck playing a more cliched cowboy?" performance stakes, and Daniel Karasik is a dot com millionaire who hosts a party that lets gentleman cowboy shine (yes, the line dancing occurs there).

Not JUST lazy and careless, One Starry Christmas also has one or two moments that will make you cringe with embarrassment. I feel sorry for everyone involved, who will all either go on to build a CV that this will be omitted from or end up stuck in permanent TV movie hell.*

Not available on shiny disc at the moment, so go for this pack instead - http://www.amazon.com/Holiday-Romance-Collection-Movie-Pack/dp/B00DNLZRLU/ref=sr_1_7?s=movies-tv&ie=UTF8&qid=1418332695&sr=1-7&keywords=christmas+movies 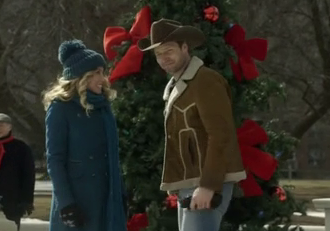