Sometimes I watch so many cheesy Christmas movies at this time of year that I start to wonder if it affects my judgment. Are some of the films better than others, or am I just so relieved when one is less painful that it gets bumped up a few points in my mind? I like to think the former, but bear that in mind whenever you check out reviews that I wrote up throughout December.

The Nine Lives Of Christmas is based on a book by Sheila Roberts. Nope, I'd never heard of it either. But that doesn't matter. What matters is that Nancey Silvers adapted it into a screenplay, and Mark Jean was allowed to direct it. And the two of them don't seem to do a bad job.

Taking place in the kind of picture-perfect American small town that now only seems to exist in the world of TV movies, this is the tale of a kind, handsome fireman (Zachary, played by Brandon Routh), a kind and attractive young woman (Marilee, played by Kimberly Sustad), and the cat that brings them together. Unfortunately, Zachary is afraid of commitment, which may hamper any potential progress for the attraction that the two clearly have for one another.

I really expected to have to endure this film, as I endure many other seasonal outings (so that you all don't have to), but I have to say that this was a pleasant surprise. Still not quite good enough to be classed as GOOD, it at least has some amusing moments that will raise a genuine smile and benefits from two leads who are very easy to like.

Routh deserves to be a much bigger star, and I run the risk of saying that every time I watch a movie that he's in. The guy is a decent actor, even if he's not among the very best, and he has the looks and good humour to make a role like this a bit better than it could have been. Sustad is a nice match for him, in terms of the tale being told here, and the two never feel too annoying or sickly in any of their scenes together. Chelsea Hobbs is okay as the woman who most people know isn't really nice enough to be with Routh's character, while Stephanie Bennett, Gregory Harrison, Sean Tyson and Dalias Blake all offer solid support.

As previously mentioned, script and direction aren't too bad either. You're never likely to get any major lesson in cinematic techniques when watching these festive TV movies, but this never feels like some of the worst examples - the ones with stationary cameras and sets that look paper-thin. No, this feels like events are taking place in a real environment. There's movement, and there are a variety of nice sets/locations used.

And there's some fun to be had. Especially if you're looking for something that's both romantic and also tolerable. 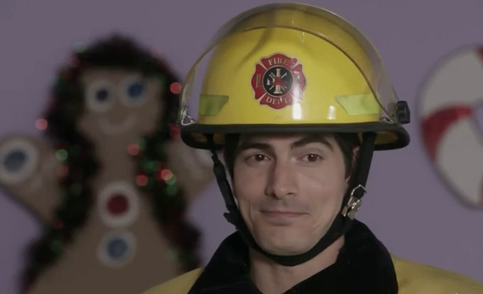