This review is going here because, well, I wanted to start off the new year with a smile on my face.

As simple as it is gut-bustingly funny, Dodgeball is a near-perfect mix of great one-liners and physical comedy, populated by a cast all playing to their strengths and directed with sharp focus on moving from one comedy beat to the next.

Vince Vaughn plays Peter La Fleur, owner of Average Joe's gym. La Fleur is a nice guy, but a terrible businessman. When he's given a very short time in which to come up with a very large sum of money it looks like Average Joe's is about to close. Which is good news for White Goodman (Ben Stiller), the narcissistic, dense, mean owner of Globo-Gym (slogan: "We're better than you, and we know it").
There may, however, be a way to raise the money and save Average Joe's. Yep, you guessed it. Dodgeball. There's a big tournament about to happen, and the prize money is just the exact amount that La Fleur needs to save the gym.

Written and directed by Rawson Marshall Thurber, who would score another big comedy hit almost ten years later with We're The Millers, this is very much a love or hate movie, and I love it. In fact, it's one of those movies that I love so much that I just hope many of my friends also love it, otherwise I start to question their taste, and then question the basis of our friendship, and then question by questioning manner, and then just collapse into a heap of paranoia and low self-esteem.

Vaughn is a fast-talking average Joe (almost literally, in this case), Stiller is the angry idiot, Justin Long is a good-hearted klutz, Stephen Root is someone who builds and builds up his anger until he explodes, Joel David Moore is a socially awkward bundle of nerves and, well, I guess you get the picture. What I'm emphasising here with my description of each character is that this is not a film to watch if you do not like any of these actors doing their usual stuff. Christine Taylor is very good as the attractive young woman who La Fleur takes a shine to, Rip Torn is hilarious as a violent dodgeball coach, and there are great cameos from the likes of David Hasslehoff, William Shatner, Hank Azaria, Lance Armstrong (although his cameo isn't as funny now as it once was) and even Chuck Norris. Gary Cole and Jason Bateman are to commentators with distinctly different styles, and Missi Pyle is the most dangerous woman in the world with a dodgeball.

Is it a modern comedy classic? Most people would probably say that it isn't, but Dodgeball has a better laugh-per-minute ratio than almost any other comedy I can think of since the turn of the 21st century. It's the perfect blend of clever and dumb, with an extra sprinkling of . . . . . . . . even more dumb, and I certainly rank it up there with many other comedy greats. It might not be perfect, but it comes close.

And the sequence that pops up during the end credits may not be big or clever, but it's yet another moment that makes me burst out laughing, ensuring that the smile stays on my face for some time after the movie has finished. 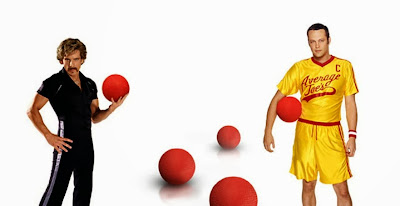