Obviously based on the infamously dangerous amusement and water park located in New Jersey, Action Park, this comedy is an excuse to once again watch Johnny Knoxville get knocked flat on his ass in a variety of ways, resulting in him having to be taken to the emergency room multiple times during the shoot.

Framed by moments of an old man telling a story of his younger days to his granddaughter, the core of the plot takes place in the late 1970s and sees D.C. (Knoxville) struggling to find a way he can reinvigorate the fortunes of his dangerously dilapidated park. He also has his daughter (Boogie, played by Eleanor Worthington-Cox) staying with him for a few weeks, although the timing isn't great, considering how much time he has to spend scheming to keep the park open. But he does come up with at least one fantastic idea; remove anything that is in place to make the rides safer. Nothing seems to make kids happier than a sense of real danger. And that's all there is to the movie, aside from some father and daughter bonding, of course.

Director Tim Kirby has an extensive background in TV and comedy, having worked often with the the peerless Stewart Lee, and on shows ranging from Look Around You to Veep and Brooklyn Nine-Nine. So I assume that is why he was thought of as a good fit for this film, which is essentially using the slight narrative to string together the kind of slapstick violence Knoxville and co. entertained us all with during their Jackass years. Unfortunately, he's unable to bring anything to the film, which is  nothing more than an uninspired selection of pratfalls.

The screenplay by John Altschuler and Dave Krinsky is of no help either. If there had at least been some great one-liners and amusing exchanges peppered in between the physical comedy then this could have been moderately entertaining. There isn't, so it isn't.

Knoxville wanders through each scene, very much looking like the broken man he so clearly is (age makes every knock that little bit more painful and every injury that little bit harder to fully recover from), and he doesn't even get moments to revel in the injury-causing anarchy. He enjoys seeing some of the madness around him but there's nothing here to match the infectious glee that was always there in his Jackass persona. Worthington-Cox does better, being the standard teen who wants some quality time with her father, and she's really the only one who seems to be making an effort. Chris Pontius is given a role that could have been given to anyone (let's face it, his strengths do not lie in his acting ability), Dan Bakkedahl is the main villain of the story, but he isn't allowed to get too crazy or nasty, and nobody else stands out. Nobody.

I am easily pleased. Most people already know this about me. And I like Johnny Knoxville (I was a latecomer to the Jackass exploits but that first film remains the cinematic experience that had me laughing harder than any other). Sadly, this lacks laughs. It lacks action. And, worst of all, it kind of lacks a point. 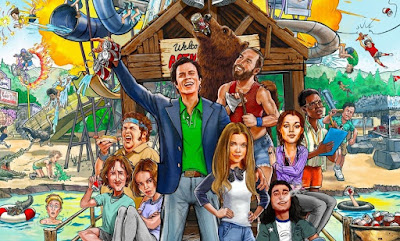