I am going to start this review with a slight, unexpected, spoiler. So don't read ahead if you want to go into the film knowing absolutely nothing about it. There's a scene towards the end of this movie, a look at the incredible journalism of the late Marie Colvin, in which the real Marie Colvin talks about her life. It's a testament to the performance from Rosamund Pike, who has the lead role here, that I thought it was still her voice, as opposed to that of the woman she had just spent almost two hours portraying. And I think that one moment underlines just how good her performance is.

Pike plays Colvin with no polished edges, no vanity. She is a tough, determined, woman who will often go further, and therefore get more, than many other journalists who take their chances out in the battlefields. But it takes a toll, and that's quite obvious from the earliest scenes. Not only physically, Colvin lost an eye while reporting on one conflict, but also emotionally. Her boss (Tom Hollander) isn't ever really sure how she manages to do what she does, but he knows that she needs to do it, both for herself and for those around the world who will be unable to deny the truth once it is shown to them.

It's no surprise to find that director Matthew Heineman has a background in documentaries, particularly from the way he presents everything to viewers here while expecting them to be able to piece everything together as we move along with Colvin from one corpse-strewn environment to another (not often shown, but a couple of devastating images are more effective for being used sparingly). Working from a script by Arash Amel, that was based on an article by Marie Brenner, Heineman asks viewers to trust him, a trust rewarded by everyone involved in the way that it feels as if we are getting to really know, and appreciate, the amazingly strong woman at the centre of things.

I started with praise for Pike because, well, she deserves it. It's a performance so strong that I'm surprised it hasn't been talked up more. In fact, I'm surprised that the release wasn't planned to get Pike in the running for some awards (she was nominated for a couple). Hollander is good at portraying her boss, a man who knows he has a star worker but also knows that it's affecting her mental health. Jamie Dornan is excellent, playing a photographer with a military background who likes Colvin, admires her, and tries to save her from her own worst journalistic instincts. Greg Wise ands Stanley Tucci do well with their limited screen time, and Nikki Amuka-Bird has at least one great moment as the one person who comes closest to calling Colvin out for the habits that she develops away from her workday, to cope with the images that haunt her.

A celebration of a life without pretending there weren't any major flaws, A Private War is a timely look at the risks some people take to get the truth out there to a much wider audience. It's also, of course, a worthy introduction to Colvin. Much like the documentaries he has helmed in the past, Heineman does justice to the central subject while also making you keen to do some more research once the film is over.

You can read about Colvin in this here book.
Americans can already buy the movie here. 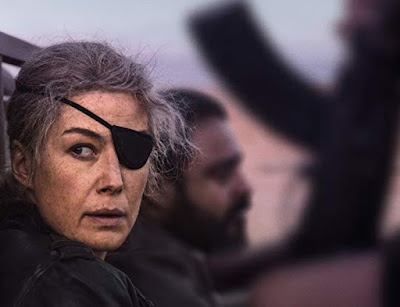