The feature directorial debut of Daniel Goldhaber (other than this he has two shorts under his belt from about five years ago), Cam is both what you expect it to be and, in a number of impressive ways, so much more. The script by Isa Mazzei (also making a debut, developing a story based on her own experiences as a former cam girl) is smart and incisive, building up the tension and atmosphere on the way to a finale that is as satisfying as it is thought-provoking.

The basic story revolves around a young woman named Alice (Madeline Brewer), who makes a living by being a cam girl named Lola. She is desperate to move up the rankings, initially into the top 50 but ultimately to the number one spot, but there are certain rules she has in place that some think will work against her. She deals with keeping her online life separate from her real life, keeping some generous clients happy while also trying to maintain a safe distance, and serious rivalry from at least one other cam girl (who, at one point, offers to strip as long as viewers help to send Lola back down the rankings). But that's nothing compared to what happens next. Someone takes over Alice's account and becomes Lola. She has the same look as Alice, seems to live in the same building, and starts to cause problems. Alice can't find a way to get her account back, reduced to having to look on with mixed feelings as the new Lola goes further than she ever would . . . and starts to move up the rankings.

There's a chance that a number of the elements worked throughout Cam are inevitable strands inseparable from the main narrative thread but I really don't think that's the case, and to say that is doing a great disservice to Mazzei. She's crafted a tale here that attempts to show cam girl life without judging the main characters, at least not for their chosen way of earning money, and also shows just how close the positive and negative qualities are. Making a completely new identity is fun, it's liberating, but it also requires you becoming much more protective of your real identity. You sell your company, your looks, your confident and sexy image, and viewers/customers who completely buy into it all can just as easily turn ugly, either looking down on people who work in the adult entertainment industry, assuming they can make a real connection and take things further, or worse. Even those who don't dismiss cam girls probably assume that their life is just one candy-coloured session after another of evenings spent lying on a bed and telling generous viewers that you're feeling really horny. Technology is allowing a lot of people to make their living in an isolated, and seemingly safer, way but it's also hackable, and everything online has the potential to eventually go viral.

All of these things are mixed in here, with Mazzei's script given solid treatment from Goldhaber, who knows how much to show to ensure that this doesn't feel completely sanitised, yet never dives headfirst into gratuitousness or sheer exploitation (which could have very easily happened). It's a good balance. This is a film about a cam girl, it's not an actual cam show.

Brewer is very good in her main role, very good indeed. In fact, the fact that she is also playing her doppelgänger is something that is easy to forget, despite both characters being identical. She manages to portray the second Lola as someone just lacking . . . something. A soul? Boundaries? It's hard to pin down, sorry, but the performance from Brewer sells it superbly. Melora Walters does well as the oblivious mother of Brewer's character, and David Druid is also good as the brother who knows how his sister is earning her money nowadays. Patch Darragh and Michael Dempsey are two fans, the former a more naive and nervous type while the latter knows how things are played (but assumes he can always still "win"). Those men are different, yet they're ultimately the same, both projecting on to Alice something that isn't actually there. Imani Hakim, Flora Diaz, Jessica Parker Kennedy, Quei Tann, and Samantha Robinson play other cam girls, with Robinson particularly enjoyable as the mean Princess_X.

Cam only has a few moments of outright horror, in the more obvious use of the term, but it's a film that is infused from start to finish with a different kind of horror, be that associated with self-identity, self-harm, or trying to earn a living in a saturated industry that has more workers trying to push things further and further while viewers constantly want more for less (or free, nobody seems to love a freebie more than men who have been titillated). You could even say that the horror is underlined beyond the end credits. When the film finished, much like a cam show, it's your reflection you see. And it's been there all the time, hidden by the more thrilling imagery laid over the top of it.

And here is a webcam you could buy (if you wanted to).
Americans can get this one (or any other you might wish to buy). 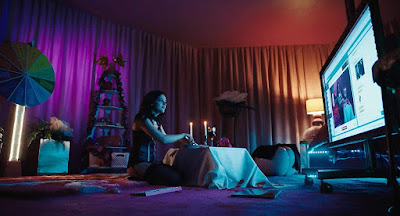