Despite never having read the source material, I understand why fans of the book would have problems with the movie version of Interview With The Vampire. Tom Cruise wasn't the first star that anyone had thought of as a good fit for the BIG role, Lestat, and any adaptation of a beloved book is bound to upset a portion of the readers, no matter who is involved. I happen to really like Interview With The Vampire (perhaps being unfamiliar with the source material helped me to enjoy it on a purely cinematic level, and Neil Jordan rarely does wrong). I cannot say the same for this film, a vampire tale so mind-bogglingly inept that I am amazed anyone agreed to it.

Lestat is played this time by Stuart Townsend. He's rested for some time and comes back out of hibernation to find that he can posit himself as a nu-metal/goth rock star. This is incredibly easy for him, and the fact that he is open about his tendency to bare fangs and crave blood only adds to his image, and his appeal. Other vampires are not happy with his publicity and fame, which means lots of them want him dead. There's also the return of the titular queen of the damned, Queen Akasha (played by Aaliyah), and a captivated young woman named Jesse (Marguerite Moreau) wanting to get close to Lestat for reasons she doesn't fully understand.

In case I wasn't clear in the first paragraph, Queen Of The Damned is a horrible movie, but it's horrible in enough ways to be fun. Everything is so wildly inconsistent (from the quality of the acting to the accents, and even the character motivations) that viewers have to resign themselves quite early on to either just accepting the nonsense they're about to watch or giving up completely. Maybe this all works better on the page, and I can imagine that it would, but the script, by Scott Abbott and Michael Petroni, is content to throw together scenes and dialogue that would be bad even in the cheapest of straight-to-disc vampire movies. I'm not sure how I would have reacted if I'd paid to see this in the cinema, but I'm pretty sure I wouldn't have been as cheerful as I am right now.

Director Michael Rymer was clearly told what had to be in the film; namely slow-motion shots of the glamorous cast members, plenty of nu-metal and mopey rock tracks (seriously, my hair developed corn rows just watching this movie, and I almost changed my named from Kevin to Kevinescence), and vampire attacks shown with the kind of special effects and camerawork usually reserved for 21st century Steven Seagal movies.

Townsend is the one who has to endure the most embarrassment, whether he's pretending to be a vampiric rock god or talking to his "master" (Vincent Perez) in front of a giant billboard of himself, with the leather-clad crotch positioned immediately behind the two. Moreau is also quite bad, although gets away with it a bit more because of the fact that she is effectively mesmerised for the majority of the movie, as is Perez (although that's also because it's hard to watch his performance without thinking of how it could be improved by replacing him with someone from the previous Lestat movie). Paul McGann doesn't have much to do, nor does Lena Olin, though she is good with her limited screentime, and the only cast member who manages to rise above the material and emanate some real presence is Aaliyah, appearing onscreen just in time to save viewers from slipping into a comatose state. If, as per the title, the film had been more about her character and less about the adventures of a rockstar Lestat then this may have been a much better viewing experience.

Not one I'll ever want to revisit, this is a film so bad that I'm amazed Townsend managed to keep a career. It doesn't even feel like a story continuing on from Interview With The Vampire. I hope, once filming wrapped, that most of the people involved here took some time to themselves to think about what they did and figure out some small way to atone for it. 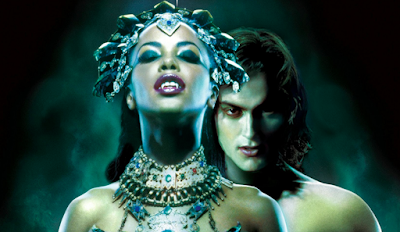