A comedy-drama based on the real events that saw a Congressman named Charlie Wilson building support, in terms of funds and supplies, for the Afghan people being decimated during the Soviet-Afghan War that lasted throughout most of the 1980s, Charlie Wilson's War is an interesting look at the fluidity of loyalty, certainly in comparison to how things stand today. It also underlines the importance of staying to finish a job if you're going to help out a country being ravaged by war, something that America didn't do for the Afghan people, arguably leading to the whole mess that we now find ourselves in.

Tom Hanks stars as Wilson, a role that makes use of his easy likability while refusing to hide the failings of the man (mainly drink and women, not necessarily in that order). Starting from a point of relative ignorance, his journey to Afghanistan, and what he sees there, begins a relatively speedy learning curve that connects him to a wealthy potential donor, Joanne Herring (played by Julia Roberts), and a talented CIA operative (Gust Avrakotos, played by Philip Seymour Hoffman). The three work hard to raise interest and money for something they view as a worthwhile war effort, and there are some startling results as Wilson digs his heels in to negotiate budget packages and effective plans.

The final film directed by Mike Nichols, this belongs much more to the writer, Aaron Sorkin. Sorkin is pretty much THE person to go to when you want to deliver lots of information in a comprehensive, and comprehendible, manner while also fleshing out a variety of main players. Adapting the book by George Crile, Sorkin appears to be in his element as he wrestles the complexities of the diplomatic and political proceedings into a narrative that manages to be both informative and entertaining. But he also makes time and space to give the leads some great moments (the lead role is a doozy for Hanks and the main scene introducing Hoffman's character is one of the funniest things that he's ever done).

Noticing the style of the writing more than the style of direction isn't to say that Nichols does anything wrong here. It's just that he is content to keep everything relatively simple when it comes to letting his impressive ensemble have fun with the script.

Having already praised Hanks and Hoffman, both giving standout performances in a career that isn't short of great turns from them, it's also worth paying compliments to Roberts (who has less screen time but still gets a couple of moments in which to shine) and Amy Adams (playing a dutiful assistant to Charlie Wilson). There are also very enjoyable appearances from Emily Blunt, Om Puri, Ned Beatty, Ken Stott, and others, all serving the script as best they can.

Given the quality of the various aspects, it's a shame that this doesn't quite become the sum of its parts. There's just something holding it back. A reticence to pick at the scab long enough, to take more moments to show the waters getting murkier and murkier, and a third act that doesn't underline the serious consequences of what is played out as a bit of a light romp for some of the main players.

This is a very good film, a smart one aimed at adults, but it could have been tweaked to be even better. 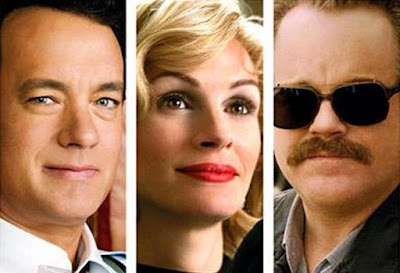