There's so much to enjoy in A Foreign Affair that the negatives end up being remembered more than the positives as you think of what could have been changed and improved to put this higher up in the rankings of Billy Wilder movies. It's nowhere near his best, and a couple of scenes really end up veering away from the delicately-balanced tone that the rest of the movie has, but it's still one to seek out and enjoy, not least for the central performances from Jean Arthur and Marlene Dietrich.

Arthur plays Phoebe Frost, a congresswoman from Iowa who arrives in post-WWII Berlin with a committee who are wanting to check on the American troops stationed there and to make sure morale isn't dipping too low. What they find is that most of the troops are having a good time, able to barter their supplies in exchanges that often leave them richer and trying their best to spend pleasant time in the company of beautiful German women they won't necessarily mention to anyone when they eventually get home. One such man enjoying his time there is Captain John Pringle (John Lund), and the lady he likes to spend company with is Erika von Schlütow (Dietrich), a cabaret singer AND former valued mistress of someone quite high up in the Nazi party. Captain Pringle wants to keep Erika safe, which may mean distracting the visiting congresswoman, and what better way to keep her off the sent of both of them than pretending to fall for her?

You may have guessed from reading that paragraph that this is an odd tale to work into a romantic comedy, yet work it into a romantic comedy it does. Despite the fact that Wilder has a knack for weaving gold from straw, he can't quite do enough here to transform this. The script, written mainly by Wilder, Charles Brackett, and Richard L. Breen (with work from Robert Harari, adapting a story by David Shaw), has some great lines scattered throughout but starts to crumble and fall apart in the third act. As things become more complicated, it also becomes less amusing and harder to enjoy. The first half should be difficult enough, built on the premise of visitors journeying around a war-torn city and realising just how unscrupulous and unfaithful many of the men stationed there are, but it bounces around between a variety of characters and locations to help distract viewers from the ugly heart of the matter. When everything focuses on the Arthur, Dietrich, and Lund, that's when the cracks start to appear.

It doesn't help that Lund isn't all that appealing in his role. He does okay, I guess, but the role really requires someone with more charm. Thankfully, the best moments involve either Arthur or Dietrich, or both in the same scene. Dietrich is at her sultry best, and gets to deliver a couple of enjoyable musical moments, and Arthur transforms throughout the course of the movie, stealing the whole thing with some absolutely wonderful drunk acting in a sequence that ends up being the last proper moment of fun in the film. Millard Mitchell is also enjoyable, playing a Colonel who knows more than he lets on for most of the film, and there are a couple of fun supporting turns from Stanley Prager and William Murphy, playing a couple of women-chasing soldiers. 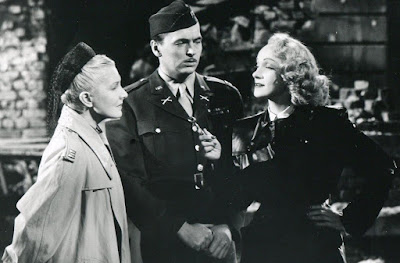