All Nighter begins with a very familiar scenario. It’s the young man (Martin, played by Emile Hirsch) meeting the father (Mr. Gallo, played by J. K. Simmons) of his girlfriend (Ginnie, played by Analeigh Tipton). That meeting does not go well. It is, in fact, a bit of a disaster. Which makes it more of a surprise when, months later, Mr. Gallo turns up on the doorstep of Martin’s home to catch up with Ginnie. Martin and Ginnie broke up a few months previously, and it’s not been an easy time for Martin. Mr. Gallo has remained oblivious to this because he’s often too busy and/or self-centred. Regardless of the awkwardness of the situation, Mr. Gallo still needs Martin’s help to locate his daughter, which sees the two of them journeying together through an evening of mishaps and, yes, some unexpected bonding.

There’s nothing here in the main premise that will stand out to viewers. Director Gavin Wiesen is competent enough, without showing any real flair, and writer Seth Owen knows that he needs to get from A to B, but the film lacks any great dialogue or strong supporting turns. What it does have, however, are two excellent lead characters who are nicely sketched out by Owen, and enhanced by the winning performances from Hirsch and Simmons. The former is playing an imperfect, but sweet, young man who also plays the banjo (which is initially played as a flaw before being used as a way to deliver a "be happy doing something you are really good at" message) and the latter is a guy not used to not getting his way, and always able to grease the right palm in order to get to wherever he wants to go.

Hirsch is very good. I've not really known him to be anything less than enjoyable in his film roles but he definitely plays this perfectly, passive for much of the runtime, and sometimes seeming like a complete pushover, but eventually altering the initial view that he's a complete loser. Simmons is equally perfect, not actually hating the young man his daughter has been dating, more just exasperated and unimpressed by his lack of drive and aim. Tipton isn't in the film anywhere near long enough, although she is welcome in the few scenes that she has. Varying supporting turns come from Meta Golding (who is fine), Jon Daly (also fine), Taran Killam (pretty bad, but that seems to stem from the poor writing making his character a one-dimensional idiot), and Kristen Schaal (as good as ever), and there are other people who come and go without making much of an impression.

From the opening scenes, All Nighter feels like an obvious and predictable comedy you have seen many times before. That feeling doesn't change once the rest of the plot actually kicks into gear. When it does change, and when it improves, is when you start to see the dynamic between Simmons and Hirsch transform into something enjoyably different from the expected constant dislike and abrasiveness. That's when it becomes a decent little watch, even if it never does enough to be truly memorable. And banjo music fans will enjoy a couple of moments on the soundtrack.

You can buy a disc here.
Americans can pick it up here. 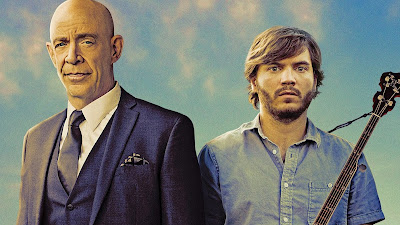