Just Friends is a fun, if forgettable, rom-com that features a great cast (mainly Ryan Reynolds, Anna Faris, Amy Smart, and Chris Klein), an average script, and a number of predictable moments on the way to a finale you can see coming a mile away, even if you've only seen a handful of other romantic comedies. It's also, to my surprise, a little darker than I recall it being, especially when you consider that the main character has become so determined and bitter in his adult life all because he resents his teenage years that saw him left in "the friend zone"*.

Reynolds is Chris Brander, a young man we first see being fairly humiliated by his fellow teens as he confesses his true feelings, in a heartfelt message, to the beautiful Jamie Palamino (Amy Smart). Jamie doesn't feel the same way about Chris.
Years later, Chris has changed. He no longer needs to wear a retainer. He's lost a bit of weight. And he ensures that no woman he is interested in ever puts him in "the friend zone". He's got everything exactly how he wants it, apparently. But that looks as if it could change when he ends up back in his hometown, looking after a crazy pop star (Samantha James, played by Anna Faris), and figuring that it could be a perfect time to reconnect with Jamie.

Directed by Roger Kumble (who started out strong with Cruel Intentions and then followed that up with the one two punch of, ummmmm, Cruel Intentions 2 and The Sweetest Thing) and written by Adam Davis, Just Friends is, in some ways, more in line with some of the anti-rom-coms that we've had over the years. Despite the lead character being appealing because he has the appearance and charisma of Ryan Reynolds, his motivation is, for the most part, decidedly dark and unpleasant. To put it in simplistic and very coarse terms, he has spent years trying to bang away the bad memories of his youth and now figures he can settles the score with what would really amount to a standard "grudge fuck", albeit one wrapped up in a confusing mess of good memories and past good intentions. If you weren't sure about this, the film spells it out on a couple of occasions, firstly by pinning so much of the plot on the fact that the fragile male ego cannot accept being "friend-zoned" and, secondly, by giving us another character who is essentially working in the same way as the main character, but without any self-delusion about his intentions.

Reynolds is as fun as he usually is in the lead, charming and witty enough to distract you from the, at best, misguided heart of his character until he is forced to face up to some home truths. Smart, an actress who has given wildly uneven performances throughout her career, is an appealing romantic interest, sweet and pretty and believably unaware of the feelings that others may have for her. Faris is hilarious, as she so often is, and Chris Klein has a lot of fun in his role, playing another admirer of Jamie who seems to be almost saintly in the way he lives his life. Christopher Marquette is a lot of fun, in annoying younger brother mode, and it's always nice to see Julie Hagerty, here as the mother of our lead.

If you're after a Reynolds vehicle to watch then he's done much better stuff since this, but he's also done a few things that are worse. This is good, not great, but certainly develops into something much more interesting and thought-provoking than first impressions would suggest.

*I have used quotation marks around every use of the term "friend zone" because I think we're all aware nowadays that it isn't actually a thing and if someone does give you a great friendship then they aren't obliged to offer you any more than that, no matter how it makes you feel. 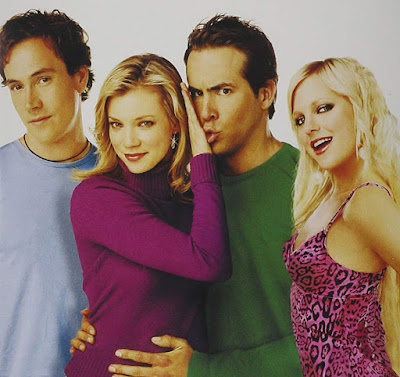