Gerard Butler. Gerard bloody Butler. I have been a fan of his for quite some time now, but he seems intent on making it harder and harder for people to say that aloud. His movie choices are often problematic, at best, and some could say that he seems to deliberately pick some of the worst scripts around when he gets his name in the hat for potential blockbuster material.

In this submarine-based action thriller, Butler plays Captain Joe Glass, a slightly unorthodox type who is trusted by the men around him because he may seem a bit odd but he gets results, dammit. He's given a crew and immediately sent off to Russian waters, where there has been an incident involving the sinking of both a Russian and an American sub. Knowing just what is at stake if the wrong move is made, Glass is determined to do whatever he can to get to the bottom of the situation and avoid an all-out war.

Written by Arne Schmidt and Jamie Moss, two men without too many scripts already under their belts, Hunter Killer is just about as lazy and incompetent as you can get, at least without descending to the level of the laughably bad. I'm not sure if the source material (a novel named "Firing Point") is any better but this certainly doesn't have me in any rush to check it out. Almost every line of dialogue is a cliché, and director Donovan Marsh doesn't think he should do anything in his role to help distract viewers from that. He adds to it all, if anything, with every decision made, taking his cues from the back catalogue of Tony Scott and Michael Bay when it comes to moments that show slick and powerful military action but forgetting to keep things orderly when it comes to the geography of the action sequences.

While there's supposed to be tension under the water, there's also supposed to be some tension on land, as a small group of soldiers (led by Toby Stephens) attempt to get in and extract a Russian president being held against his will by the individual who wants to start the war. One decent sequence aside, involving an enemy sub hidden under a large ice glacier, no tension is to be found once the plot starts to unfold. There are also no characters to care about, and the ending is laughably bad.

Butler is still a decent onscreen presence, making this just about bearable, and the cast is rounded out by Stephens, Michael Nyqvist (also a highlight, playing the rescued captain of another submarine), Common, Gary Oldman, and Linda Cardellini. I like all of these people when they're in half-decent movies. This isn't even a half-decent movie.

The submarine movie subgenre isn't the biggest one around, by far, but I guarantee you that almost any other film you can think of featuring periscopes, men getting tense while standing quietly in a floating chunk of metal, and radar screens that go ping and bloop, will be better than this. That even includes Down Periscope.

Dive in here.
Americans can buy it here. 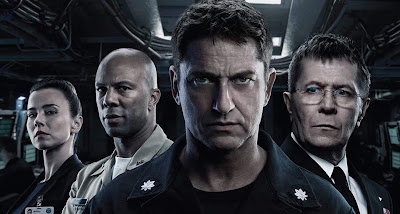