A film that is probably still underseen today, or considered that way by those who love it, The Blood On Satan's Claw is a creepy and intriguing slice of folk horror that easily sits up there alongside some other classics of the subgenre (such as The Wicker Man and Witchfinder General).

Things all start to get strange when a young man finds some strange remains in a field that he is ploughing. Sensing that there is something wrong with his find, he tells others, but it's initially shrugged off. Meanwhile, something is affecting a number of local residents, not least a group of the younger folk who start to band together into a dangerous coven.

Directed by Piers Haggard (who directed a lot of forgettable stuff, but also did this and the 1981 film that put Klaus Kinski and Oliver Reed in close proximity to a deadly snake, Venom), this brooding horror film is a wonderful mix of the subtle and the bonkers. You get people acting creepy, you get mistrust and division creeping through the community, but you also get glimpses of a diabolical beast (or, at the very least, a furry hand with sharp claws), and a number of people developing patches of excess hair on their body (the Devil's Skin).

The script, mainly written by Robert Wynne-Simmons, with input from Haggard, manages to build one small moment on top of another in a way that allows things to get truly diabolical by the grand finale without having felt too silly or unbelievable. That's an impressive feat, and even more impressive when you consider the individual elements once the film has finished.

The cast all do a good job in their roles, even the lovely Linda Hayden as Angel (who ends up having to act under some extra-thick eyebrow growth, signifying her evil as she leads the corrupted youths who come under her thrall). Patrick Wymark is The Judge, the main authority figure who the locals assume will be able to get to the bottom of things, Barry Andrews is the young man who makes the fateful discovery, Anthony Ainley is the reverend who senses that something is seriously wrong, and Michele Dotrice and Wendy Padbury stand out as two girls grasped by the coven in very different ways.

If you're interested in British horror movies then this is a title that you really need to check out. If you're interested in the more niche selection of folk horror movies then this is essential viewing (alongside the two titles mentioned in the first paragraph - throw in Robin Redbreast and you have a fine primer). And if you end up enjoying it, as you should, then make sure you turn others on to it.

You can buy the movie here.
Or here. 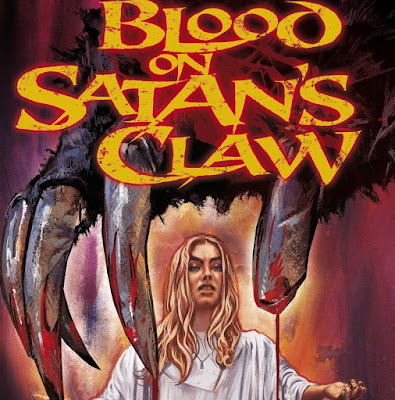