Based on a book of the same name by Jay Cronley, that had previously been made into a French movie named Hold-Up, Quick Change is one of the few movies that I would refer to as underrated, if I ever used that word. But I try not to. Underrated, overrated, these things simply mean that you liked or disliked a film in a way you feel is different from the majority opinion. So let me just say that I have always liked Quick Change a lot more than the majority of film fans.

To date, this is the only film directed by Bill Murray (well . . . he co-directed with Howard Franklin, who also wrote the screenplay) and I wish that he'd decided to give it another go at some point, because this is a very enjoyable comedy that puts together a fantastic cast and makes great use of most of them.

The plot is simple. Murray dresses up as a clown and robs a bank. His plan is to delay the police for as long as possible while he and his accomplices get out of the city. They could be halfway to a tropical island before the police even risk storming into the bank to free the hostages. That doesn't happen though. Chief Rotzinger (Jason Robards) figures out what could be happening, which means the pursuit is on. The bank robbery itself was easy, the hard part is getting out of the city.

Alongside Murray and Robards, this cast includes Geena Davis (who I will watch in anything), Randy Quaid (who I am happy to watch in anything that isn't home-made), Phil Hartman, Tony Shalhoub, Stanley Tucci, and Kurtwood Smith. The latter two may be underused but they're still welcome additions to the cast list.

As well as a fun heist movie and a comedy of errors, Quick Change works as a very strange love letter to New York. The frustration of living in the city is what leads to the plan, and all of the obstacles in the way of the escaping robbers stem directly from the attitudes of the other New Yorkers that they meet, be they opportunistic car thieves, unhelpful construction workers, cab drivers who haven't mastered the language yet (a crude stereotype but one improved by the performance of Shalhoub), jobsworth bus drivers (a scene-stealinng turn from Philip Bosco), or members of the local mafia.

As I said, I have always liked this film more than the majority of film fans. I don't think that will ever change, but I'll be happy if I can convince one or two others to at least give it a chance.

A region 1 disc can be bought here. 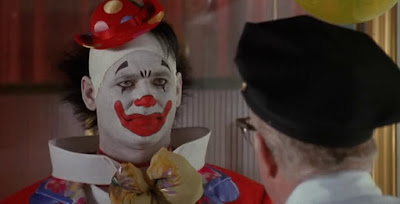