Netflix And Chill: An Evening With Beverly Luff Linn (2018)

The director of An Evening With Beverly Luff Linn is Jim Hosking. He is the man who was also responsible for The Greasy Strangler, which is important information for anyone going into this. Because this movie is, if anything, even more bonkers than that movie. It's also even funnier, and has already become my favourite film from the many I have seen so far this year. It's insane, it's very stupid at times, and it's bordering on the absolute genius. Hosking, with the help of a very game cast, made me laugh more than I can remember laughing during any film I can think of from the past few years. And I know that my enjoyment of the movie could just as easily get me funny looks from someone sitting beside me and hating every moment.

The very basic core of the plot revolves around Lulu Danger (Aubrey Plaza), who takes a chance to escape her loveless marriage to Shane (Emile Hirsch) when a petty crime he executes ends up getting him threatened by Colin Keith Treadener (Jemaine Clement). Lulu and Colin head off to hole up in a hotel, the same venue that is about to hold the titular evening of magic with Beverly Linn Luff (Craig Robinson). Lulu and Beverly have a past, or so she believes, although this is news to the person who currently cares for, and loves, him.

Where to begin with this? I really have no idea of how best to convey my enjoyment of this film. If I simply quoted lines from the script, co-written by Hosking and David Wilke, then nothing would seem that funny, out of context. The words ARE great, but it's the strange delivery and mood of the whole film that helps to build every moment into comedy gold. And everything is helped along by the simplistic, and brilliant, soundtrack from Andrew Hung.

Plaza shines in the lead role, the perfect mix of weird and cute and dangerous that she does so well. I know she has bills to pay but I really wish she would take ten roles in films like this (and the enjoyable Ingrid Goes West) over the more mainstream movies that waste her talent. The majority of her scenes are alongside Clement, who threatens to steal every scene he is in with his mix of inanity and earnestness. Robinson is good, although doesn't use too many words, and Matt Berry is very amusing as the man looking after him, and you get wonderful turns from Sam Dissanayake, Zach Cherry, Sky Elobar, and Jacob Wysoki. You actually get wonderful turns from everyone involved, but they are the people I am going to name here. Oh, and Emile Hirsch deserves more words of praise than I can come up with here. Delivering every line he has in a very particular style, his performance was the most surprising. I like Hirsch onscreen but never thought of anyone who would be able to make me laugh as much as he did here. His performance feels like he's channeling Jack Nicholson, Nicolas Cage, and John Cleese, with all three personalities battling for dominance of every sentence he speaks.

Some reviews (many, in fact) feel redundant. I cannot put my finger on what Hosking gets so right here because it feels like a whole bundle of negatives that somehow all add up to a positive, and I don't see this working for at least half the general population (the sane half). But for the people it DOES work for . . . it's going to become as much a treasure to you as it is to me.

You can buy the disc here (even if you hate it and then send it to me).
Americans can treat themselves here. 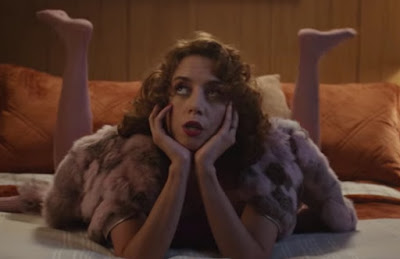