Based on a true story, to a degree, Tag is a comedy all about a group of friends who have tried to stay young at heart by competing in an ongoing game of, as you may have guessed, Tag. It happens every year, throughout the month of May. That last one who is tagged as "it" is the person who has to spend a whole year knowing that they were the loser. One member of the team (Jerry, played by Jeremy Renner) has never been tagged, but this is the year when that changes. It's also the year of his wedding.

Marking the feature directorial debut of Jeff Tomsic,  Tag is about as middling as mainstream comedies get. I'm not going to deny that I laughed a few times, which is a few times more than I expected to, but a lot of the humour here comes from the cast, who elevate the fairly weak script by Rob McKittrick and Mark Steilen.

Renner is a lot of fun here, his ultra-serious approach to covering all of the bases to avoid being tagged a highlight of the film, and the rest of the team do well. Ed Helms is the one who seems to have things planned out best, Jon Hamm looks to be a viable threat at times, Jake Johnson is in unfocused stoner mode, and Hannibal Buress amuses with a number of timely, but unhelpful, observations. Isla Fisher is very good, playing the wife of the character played by Helms, her intensity turned all the way up to 11 for many of her scenes, Leslie Bibb isn't bad as the bride-to-be, and Annabelle Wallis follows the group to get an unexpected story for her newspaper, the Wall Street Journal. Rashida Jones is always a welcome presence, but she's shoehorned in here as a distraction for two of the main male characters, and subsequently given nothing decent to work with.

I'm surprised that we don't get a selection of upbeat pop hits but, otherwise, this ticks all of the expected boxes. You get flashbacks to the characters playing the game as kids, you get a number of tag-related set-pieces, there are some underhand tactics, and you also get a secret revealed towards the back end that is supposed to underline everything with some additional emotion and poignancy (although it doesn't). Fisher aside, the women onscreen are mostly sidelined by the men running after one another and being big kids, and it's all presented as a wonderful way in which friends stay bonded over the years and hang on to their youth.

It's a shame that this is so mediocre throughout, but then it's also hard to see how it could have been anything more than that. How, after all, do you flesh out a film that is based around such a silly, and lightweight, concept? Maybe you decide that it's not really film-worthy and move on to something better instead.

Some may, of course, like this more than I did. Many may liked it even less. Aside from the lack of major laughs, I just found myself often watching the carnage onscreen and wondering just why these people were being celebrated for being selfish men-babies who didn't care about the damage they were causing to bystanders and property as they raced to tag one another. That may just be a sign that I am now officially middle-aged. Or it MAY be that these characters aren't really worthy of a whole movie.

You can pick up the movie here.
Americans can catch the movie here.
Or just click on those links and go shopping crazy. Because that gets me rewarded and gets you a nice selection of gifts to yourself. 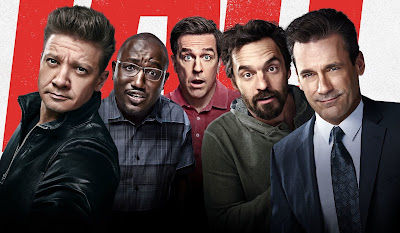