Based on a true story as amusing as it is quite tragic, Can You Ever Forgive Me? is the film that may finally convince those who go out of their way to avoid Melissa McCarthy movies to finally give her some of their time. Because, and I'm saying this as someone who has been a fan of her comedy work for a long time now, this is easily her best movie performance so far. I hope that it allows her to mix it up with the roles that she picks, but only time will tell.

McCarthy is Lee Israel, an author who isn't doing too well. Her cat is ill, she is behind on her rent payments, and her apartment has a fly problem (and smells pretty bad too). When she finds a letter by Fanny Brice, the subject of a biography that she is attempting to write, she makes a little bit of money by selling it on, but learns during the exchange that the price would have been considerably more if the content had been more exciting. That gives her the idea of creating exciting letters, claiming that they were recently discovered, and getting herself a great payday for each one. What could possibly go wrong?

This is only the second feature film from director Marielle Heller, working here from a script by Nicole Holofcener and Jeff Whitty, but this puts her at two for two (I recommend checking out The Diary Of A Teenage Girl). The two central characters are great (the other lead performance coming from Richard E. Grant) and it clearly shows how Israel quickly put the pieces together when she realised that she had an opportunity to improve her life with what she probably viewed as a bit of a victimless crime. Indeed, it's something that Israel finds she has an actual talent for, a way with words while she is emulating others that supersedes her own writing style, and that is a silver lining that accompanies the crime-clouded majority of the movie.

I have already praised McCarthy at the very start of this review so won't repeat myself. She works very well alongside Grant, who gives the kind of brilliant performance that reminds you of just how good he can be, given the chance. There's a small, but absolutely hilarious, role for Jane Curtin (playing an agent who suffers whenever Israel wants to lash out in anger over her current situation) and Dolly Wells is very sweet in her role as the book dealer who inadvertently starts Israel off on her criminal endeavour. The fact that her character also clearly likes Israel for who she is ends up being another big plus for the movie.

Although this is a film about a peculiar, and particular, "crime spree", it's also simply a look at two people who have a chance to make themselves feel like human beings again, rather than nobodies either ignored by people or looked down upon. It manages to do that without ever becoming too downbeat and dreary, although a couple of moments come close, and without feeling as if it is glorifying the activities of Israel. Because, no matter how satisfying or well-crafted her forgeries were, she knew that her best moments as a writer were all thanks to celebrated writers of the past.

Imitation may be the sincerest form of flattery, but it replaces originality and individuality (obviously). So the title Can You Ever Forgive Me? may apply to those Israel ended up affecting with her crimes, but may equally apply to herself, a woman played by McCarthy as someone who lost her own voice and went too far when she found that she had a knack for emulating others.

You can buy the book here.
Americans can order the film here. 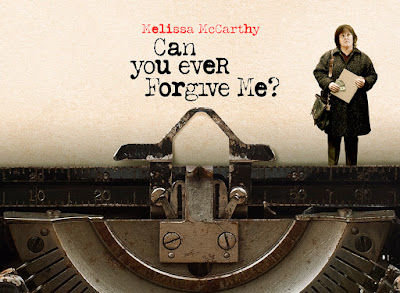