The more I think about Venom, the more I find to like about it. The fact that it is such a strange . . . mess (not unlike the titular character) just adds to its appeal, and Tom Hardy gives a fun central performance, both physically and vocally.

The basic story goes like this. Hardy is Eddie Brock, a journalist who has a habit of pushing things too far in order to get to the heart of any story. His latest story concerns shady happenings at a science facility, overseen by Carlton drake (Riz Ahmed). He ruffles feathers, he gets sacked, and he ends up with a symbiote attached to his body. This is a creature that can stay hidden within Eddie for some time, but breaks out when the host body is put in danger, or when it gets hungry. It can appear at other times but those are the two main motivators. But will it destroy Eddie, or will the inevitable pile of corpses end up with his own being the last one upon it?

I just described the performance by Hardy as fun but that's really the word that I should use to describe this entire film. It's fun, it's a romp, and there are times when it's madder than a bag of badgers. Full marks must go to the cast and director Ruben Fleischer, because everyone somehow knows the best way to work with material that has the potential to vary wildly in tone, yet manages to remain consistently darkly comedic.

The script, written by Kelly Marcel, Jeff Pinkner, and Scott Rosenberg, manages to stay just the right side of dumb. The characters aren't very complex, the main baddie is obvious from the very first scenes, and it seems that everyone understands that viewers want to see Tom Hardy developing new powers and transforming into something that will happily bite the heads off people.

This is Hardy's show, from his conversations with himself to his manic nervousness as he tries and tries to get his body back under his own control, and he's a star completely unafraid to throw himself completely into things. It's easy to praise actors as fearless when they're cast in roles that require them to bare themselves completely, both emotionally and physically, but Hardy is equally fearless in a different way. In fact, it's at least partially down to his sheer presence and force of will that this ends up being as entertaining as it is. Ahmed is fine, although there are a number of scenes when his more understated performance feels a bit out of place, and Michelle Williams plays her part, which leaves her sidelined for a lot of the movie, with a twinkle in her eye that suggests she got paid a decent amount for a role that let her have more fun than many of her more prestigious turns.

Is there anything here to dislike? Of course there is. The CGI is varied in quality (sometimes excellent, sometimes eye-searingly awful, especially in one or two scenes that have far too much going on), the grand finale is a bit of an anti-climax, and, perhaps worst of all for fans of the character, Venom has been turned into a softened version of the beast that comic readers have enjoyed for many years. That will upset some viewers. But it doesn't harm the film in any way, and I already have high hopes for the inevitable sequel.

Venom is available to buy here.
Americans can pick it up here. 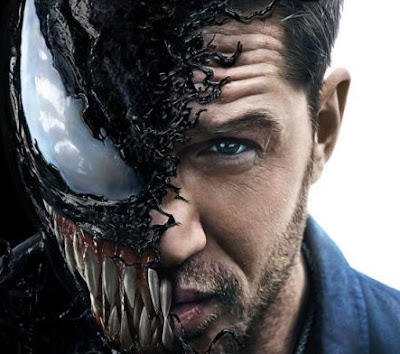