Michael Mesmer is Uncle Mike, looking after his nephew, Brian (Brian DePersia), for the evening. He just wants a peaceful night, but it soon becomes clear that he will only get that once he has told Brian a number of bedtime stories. They're all very familiar tales, but with a slight revision from Mike. First, a young slave named Peter (Scott Valentine) is forced into helping two witches revive their dead sister. Second, we get a version of Little Red Riding Hood. Third, and finally, we get Goldi Lox (Catherine De Prume) and the three Bears (a mother who has helped her husband and son escape from a fairly insecure mental health facility). And there's a small wraparound tale, of course, with young Brian becoming more tense after each tale.

Directed by Jeffrey Delman, who also wrote some songs featured in the movie and co-wrote the script with J. Edward Kiernan and Charles F. Shelton, this is a cheap and cheerful anthology that should amuse horror fans while being completely forgotten by everyone else. It's a shame that Delman obviously wanted plenty of comedy in the mix because the tale that plays things most seriously (Little Red Riding Hood) is the best of the three, and the one that is supposed to be funniest, the last of the three, is the weakest segment.

Mesmer is fun as Uncle Mike, trying to put in the minimum amount of effort to babysit his nephew, and DePersia is perfectly tolerable, but the rest of the cast vary wildly, depending on what they're given to work with. Valentine is a bland "lead" for the first tale, overshadowed by the evil witches and their plan. Nicole Picard is much better as Rachel, the Little Red Riding Hood of the second tale, and Matt Mitler is also excellent as the menacing man who ends up encountering her grandmother. As for that last tale . . . oh dear. Oh dear, oh dear. Melissa Leo may have a small role in this one, but the cartoon tone doesn't allow anyone to do their best work, and when De Prume shows that her Goldi Lox has a particularly dangerous "talent", by crossing her eyes and waiting for others to feel the effects of her powers, the end result is laughably embarrassing.

Not a film that will ever appear on the top end of any "best anthology movies ever" list, this is a relatively painless experience that certainly remains a step or two ahead of many modern movies trying to recapture the same vibe. 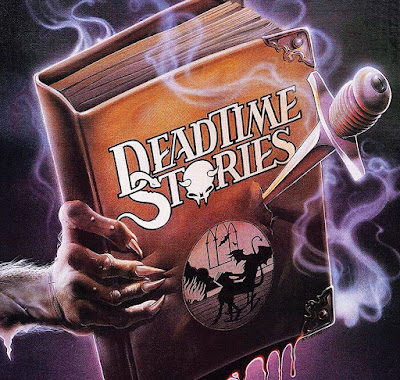