There's a fine line that many horror movies walk nowadays, even horror movies with a wide streak of humour in them. How do they try to rework subgenre staples that have been tired ever since they started to oversaturate the market by the start of the 1980s? You can either play it completely straight, up the gore quotient, and hope you make something that people appreciate enough to overlook the clichés or you can try to be self-aware and make fun of viewer expectations. It's easier to do the latter than it is to do the former, but both are quite tricky to get just right. Making a joke about something being tired and overused isn't always enough to distract people from the fact that much of your material is tired and overused. Deadly Detention tries to sit in between these two camps, and doesn't do enough to impress either way.

Five teens are stuck in detention, which is taking place in an abandoned prison because of the school having a bit of a pest infestation problem. The five are pretty much archetypes. Alex Frnka is Lexie (the sexy bad girl), Henry Zaga is Barrett (cool Mr Perfect, superficially), Sarah Davenport is Jessica (goody two shoes), Coy Stewart is Kevin (black ands gay), and Jennifer Robyn Jacobs is Taylor (quiet, skateboards everywhere possible). Looking after them is Ms. Presley (played by Gillian Vigman), but that all changes when it looks as if Ms. Presley is killed by someone who wants to hunt the teens down and kill them all.

Although not awful, Deadly Detention is one of those films that just never makes the effort to be as good as it could be. The script, written by Alison Spuck McNeeley and Casie Tabanou, fails to really mock the core aspects of the premise, making the characters self-aware enough to label themselves but otherwise not having as much fun with the stereotypes as it should, as if the writers were worried that laughing at the silliness of it all would weaken the material. Unfortunately, this ends up, yep, weakening the material. Especially when there's no real tension developed once we get into the section of the film that plays out like a game of cat and mouse (mice), and don't get me started on the grand finale, which had one or two reveals I could see coming from the opening scenes of the film and other moments that had no impact because nothing had been set up in the runtime preceding it.

Director Blair Hayes goes through the motions but also fails to help the script. It's perfunctory, at best, and sometimes just lazy. The main characters are in a prison. At one point they jump up through some polystyrene ceiling tiles and start to crawl through the space above, trying to stay in the right place that stops them from falling back through those flimsy, light tiles. In a prison building. Correct me if I am wrong but I just couldn't accept the fact that any prison would use those tiles. It would have certainly cut the runtime of The Shawshank Redemption down to about all of fifteen minutes, surely.

The cast are okay, considering what they are given to work with. Frnka and Davenport fare the best among the teens, although I did also enjoy Stewart when he wasn't asked to just be the jittery black kid, in a way that was almost uncomfortably similar to some of the early cinema clips shown in Horror Noire: A History Of Black Horror, and Vigman is a highlight as the authority figure who can barely contain her frustration at the attitude of some of the children in her care.

In a way, this is a film made better by the fact that you can currently find it on Netflix. You don't have to pay anything extra for it, it will probably reach a wider audience there than it otherwise would have managed, and it's one you can stick on without worrying about having to invest too much time or thought into it. 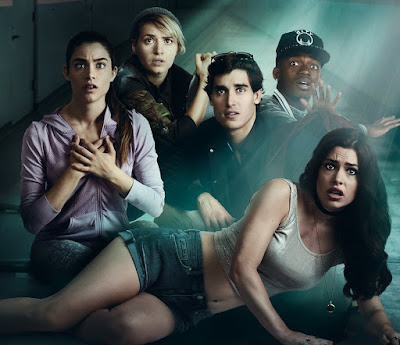