Karyn Kasuma may actually be one of my favourite female directors. She's managed it quite stealthily, and not without a mis-step here and there, but when I look over her filmography and realise how much I like the films that I have seen from her then I realise that I should be bringing her name up a bit more often. I may not have liked The Invitation quite as much as many other people but I DID like it, and the fact that I still rate Jennifer's Body highly helps to make up for that.

I could say something similar about Nicole Kidman, who has spent the past couple of decades building up a very interesting body of work. The fact that she wasn't right for a few of the roles that she took on meant that I perhaps dismissed her filmography as nothing more than a series of bad calls and bad movies. That's not the case at all, and Destroyer, a film that may once have been considered yet another mis-step for her (by me anyway), reinforces the fact that Kidman is, and has almost always been, an actress willing to take risks as she works with challenging material.

Kidman is Erin Bell, a detective who has been burnt out for a number of years after an undercover job went horribly wrong, although we're not exactly sure how until the movie is ready to reveal everything. She believes that a major baddie (played by Toby Kebbell) is back in town, needing stopped, and she'll do anything to make that happen. Meanwhile, her daughter (played by Jade Pettyjohn) seems to hate her guts, her partner (Shamier Anderson) is constantly kept in the dark, and her world is contracting around her as she focuses obsessively on exorcising past demons and getting the result that she wants.

If you read that and just found it to seem like a whole lot of familiar clichés then I couldn't say you were wrong. There's a lot here that we've seen many times before, usually with a male character at the heart of everything. The burnt-out cop who doesn't play by the rules, the tragic past that created their attitude in the present, the personal stakes when it comes to dealing with the villain, writers Phil Hay and Matt Manfredi are unafraid to use these elements liberally, relying on some other twists and turns to keep things feeling fresh, as well as the strength of the cast.

And what strength the cast show. Kidman is almost unrecognisable during her first few scenes, and it's not just the impressive make-up changing her. The physical side of her performance, her mindset affecting everything from her walk to her dead-eyed observance of the hazy world around her, ensures that there are very few moments that have you watching and thinking of her as anything other than Erin Bell. The version of Kidman we all know really disappears, and this may be her best performance yet (although I am now keen to catch up on the rest of her filmography). Sebastian Stan is also excellent, playing the other officer involved in the undercover operation, and there are solid turns from Tatiana Maslany, Scoot McNairy, Beau Knapp, Bradley Whitford, Zach Villa, and others. It's a shame that the one performance that doesn't feel right is Kebbell, playing someone who swaggers around like the lead singer of a big-haired '80s metal band, and shown to be charismatic and persuasive without anything to actually show why people view him that way. The fault there doesn't lie with Kebbell, it's an issue with the script and direction, but any scenes that have him as the focal point suffer when they should have been clear highlights.

One or two minor issues aside, like the one just mentioned, Kusama directs with confidence and a precision that isn't always obvious, considering the many flashbacks used to detail the story and the many secondary characters who are only integral to the story due to them being integral to the lead character getting closer and closer to her desired end result, but it is always there. Viewers know that there's not necessarily going to be a happy ending here, yet the finale remains both impactful and satisfying. Great work from Kusama, a consistent talent and a name that everyone should be, or become, familiar with.

The DVD link is here.
Americans can use this link for a shiny blu. 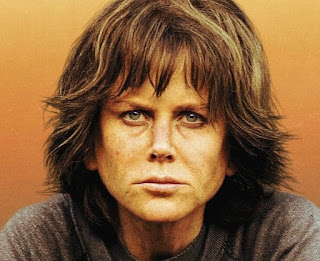