Based on the book by Robin R. Means Coleman, Horror Noire: A History Of Black Horror is exactly what it says it is. The lean runtime means that it's by no means exhaustive, and a lot of that runtime is given over to celebrate Get Out, but this is still a pretty impressive primer on the subject, providing viewers with a varied list of titles to check out, and plenty of context to consider while thinking back over the history of the horror genre.

The format is simple. Various people are encouraged to discuss aspects of African Americans in horror movies, often in a theatre setting while clips from horror movies play on the silver screen in front of them. The discussion points range from the downright awful use of an actor in blackface to portray a dangerous black man in The Birth Of A Nation through to the recent success of Get Out, with plenty to mull over in between, from the virtual non-existence of black people in the sci-fi horror movies of the '50s and '60s (because they weren't considered eligible/educated enough to be part of the scientific community) to the well-known trope of the black character being killed off fairly early to show how dangerous things are for the white leads.

Although fairly simple in the way it works chronologically through the horror genre, Horror Noire works very well because of the singular viewpoint. It is that focus, as obvious as it seems to say it, that turns the familiar into something new and interesting. Some of the discussion points may feel more obvious than others but all of them deserve your time and attention. I'll admit that I was scoffing at some moments, thinking that people were stretching too far in order to dissect something that possibly wasn't intended to exclude black people, or portray them in a harmful way, and then I was won over, realising that I'd just never considered the weight of those cinematic decisions before because I sit in the main demographic (as a straight, white male I have been represented comfortably throughout the entire past of cinema).

It's an impressive roster of names that's been assembled here, and I'll namecheck a number of them: Jordan Peele, Ken Foree, Keith David, Tony Todd, Ernest Dickerson, William Crain, Rachel True, Loretta Devine, Miguel A. Nunez Jr, Ken Sagoes, Richard Lawson, Tina Mabry, and more. And the titles discussed are just as impressive, especially if you're a fan of films like Night Of The Living Dead, Blacula, Tales From The Hood, Candyman, and Sugar Hill (and why wouldn't you be?).

It would seem that we're currently in a much better time for African Americans in the movie industry, both behind the scenes and in front of the camera, which makes this a timely documentary, a journey that ends in a place of celebration rather than pessimism. But it's also important to keep that momentum going, that progress, that representation, and not have this current boon period being a blip in a more depressing overview that tries to surmise what went wrong a couple of decades down the line.

You can buy Candyman here.
Blacula is here.
A R1 disc of Eve's Bayou is here. 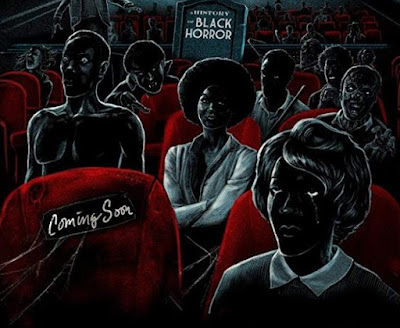