Another collaboration between writer-director Michael Winterbottom, also helped here by Sean Gray, and star Steve Coogan, Greed is a fictionalised look at the life of someone not a million miles away from high street business mogul Philip Green. While it is not up there with their best work (24 Hour Party People is a tough one to beat), Greed is a smart and funny way to deride the rules and tricks in place to allow capitalism to thrive, as well as a comment on the high cost of cheap “fast fashion”.

Coogan plays Sir Richard “Greedy” McCreadie, a businessman looking to have a memorable birthday party for his upcoming 60th. He wants famous guests in attendance, an extravagant Roman theme, and time with the slightly awkward journalist (played by David Mitchell) who has been hired to write his memoir. Unfortunately, the planned celebrations are soured by the fact that Sir Richard seems to be losing his popularity, due to being hauled in front of some politicians to answer questions about his business practices, and the Greek beach party setting being made into a temporary home by some Syrian refugees.

Showing key points in the life of someone who decided early on that money was the best idol to worship, Greed uses a non-linear structure to highlight the ways in which bad behaviour are rewarded by those who can strong-arm their way further and further up the business ladder. Negotiations shown here aren’t subtle and considerate of the various supplier issues, but rather the bullish haggling of someone who believes all that matters is getting stock for their shops at the lowest possible price.

Coogan delivers a great performance, defined by his tan and shiny teeth, and equally defined by his need to overcompensate after dragging himself to a position of great power and wealth. Shirley Henderson, not very far removed from Coogan in age, plays his mother, and does an excellent job of showing the attitude and strength that would be passed along to her son, just as some of those values are then passed along to the next generation (with Asa Butterfield getting the best moments in that regard). Mitchell is perfectly cast, Isla Fisher is a lot of fun as McCreadie’s ex-wife, who stays a good friend to him, and Dinita Gohil is the embodiment of someone with a life affected by the repercussions of the immorality of such rampant capitalism.

The script is solid, although it definitely allows Coogan to stay within a comfort zone of playing someone full of arrogance (so I am not sure how much was on the page and how much, as usual, was brought to life by allowing Coogan to improvise), and Winterbottom does his best to fill every scene with little moments that show how ridiculous people are when they consistently need to show off wealth that they have spent their entire lives pursuing.

You may not enjoy the film at times, which just proves that you are not as slavishly worshiping at the altar of capitalism as the main character, but it is definitely worth your time, and some information provided at the very end of the film allows for viewers to ponder what they might do differently in an effort to try and make the world just a slightly better place for people who are trapped in poverty. No matter what the rich and powerful tell us, trickle down economics just keeps seeming to trickle up, and Greed illustrates that perfectly. 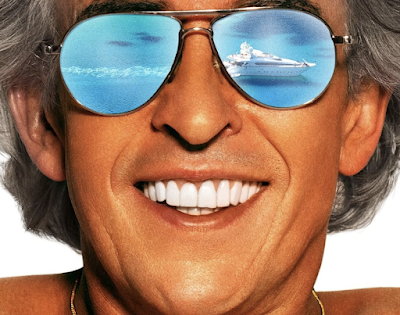