Confessions From The David Galaxy Affair (1979)

Another Mary Millington vehicle directed by Willy Roe and written by George Evans, Confessions From The David Galaxy Affair is at least, similar to The Playbirds, a piece of adult entertainment that attempts to thread the minimal semblance of a plot through things.

Alan Lake plays David Galaxy, a playboy lover man who finds himself in hot water when he starts to be investigated by Chief Inspector Evans (Glynn Edwards). The police are wanting to know where Alan was on the day of a robbery, and he needs to get someone to give him an alibi. But that could turn out to be a lot harder than expected, with Alan not really surrounded by good friends. He does have people rooting for him, however, when it comes to his sexual exploits, especially when he is challenged to please a woman (Millington) who is said to have never before had an orgasm.

If tweaked here and there, this could have been a comedic crime paper with some enjoyable sauciness. You could have had more flashback scenes, and more time spent with Lake trying to keep his head above water. But it is sold on Millington’s name, which means you get the sexual escapades throughout, interrupted by some of the crime caper plot.

Roe directs just fine, for what the film is aiming to do, and the script has some minor highlights, despite being massively problematic here and there. But I cannot be sure how many of the worst moments are down to the script and how many are down to choices made by actors. Lake seems to be enjoying himself when he is allowed to change his character for a couple of scenes, portraying both an Asian gentlemen and a gay man at different times, with the sensitivity and nuance that you might expect from a film like this. None.

Lake isn’t bad in the lead role though, and somehow stays quite likeable as he skips from one but of nookie to the next. Edwards is good to see, and brings some weight to things, never allowing you to doubt that he is serious in wanting to apprehend the lead. Millington has one key scene, obviously, and does what you expect, and I enjoyed the small amount of screentime allotted to Diana Dors and Bernie Winters. There are other people involved - Anthony Booth, Kenny Lynch, Milton Reid, Sally Faulkner, Rosemary England, etc - but none of those make as strong an impression as those already mentioned (even if Faulkner is involved in an amusing scene in which she is offended by David breaking wind in bed).

Another movie of this kind, and from this time, that is hard to imagine keeping enough people pleased for the runtime, with the softer sex scenes, clumsy humour, and plot strand about the criminal investigation, it ends up being a bit more enjoyable to everyone who may simply be watching it nowadays to satisfy their curiosity. 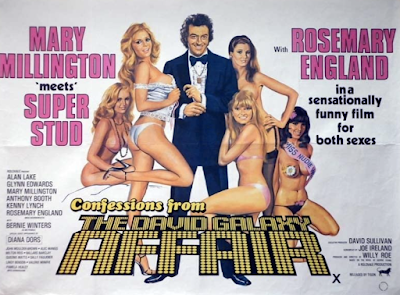