As Mark Kermode, eminent UK film critic and long-running champion of The Exorcist, is prone to tell/remind us, in his view, Jaws is a classic film that isn’t about the shark. I tend to slightly disagree, but I absolutely get his main point. I mention his point now because sport movies are rarely about sport. They can be about so many other things, simply using the sport setting to ground a number of relatable life lessons. Nadia, Butterfly is a film about swimming, but it’s not really about swimming. I will come back to this very soon.

Katerine Savard, a young woman who really is a superb competitive swimmer in real life, plays Nadia, a young woman who has decided to bring her competitive swimming career to an end. She has a rough plan for what she wants to do next, and the announcement about her retirement just before a big team relay event has a number of people questioning her on her future. Nadia’s first immediate part of her new life, however, is just to have some fun.

Written and directed by Pascal Plante, Nadia, Butterfly is a film that ultimately explores a mindset that can work in so many different environments. Dedicating yourself to any pursuit requires making difficult decisions sometimes, and sacrifice (be it time, money, etc). But suddenly removing that one thing from your life can also leave you feeling a bit lost, wondering what to do with your new freedom and the extra time available to you.

Savard is very good in the main role, seeming to enjoy a role that asks her to portray someone not too far removed from herself. She certainly has much more screen presence than many other sporting personalities I have seen in movie roles, and maybe she can keep edging a little further and further out of her depth if she keeps up the acting career (pun intended). The supporting cast all do well, with the standout being Ariane Mainville, playing a friend named Marie-Pierre, her character showing how others may be seismically affected by such a change in direction from someone they have known and worked with in one specific part of their life for so long.

A film about swimming that isn’t at all about swimming, Nadia, Butterfly is an interesting and unique way to present a number of familiar situations and quandaries to viewers. I look forward to seeing more from Plante, and I also hope to see a bit more in the acting world from Savard. Even if she doesn't take every role based on how much time her character spends in a swimming pool. 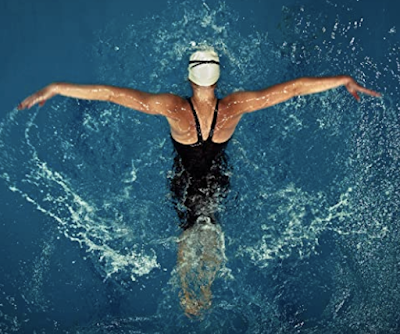