Director Cody Calahan has been doing some interesting work over the last ten years or so. Just last year alone he directed both this and The Oak Room (a film I am looking forward to rewatching before I give it a full review). But he started his feature career with Antisocial, which is a film I really disliked. I'm glad that I forgot all about my first exposure to his work, especially now that I am actively looking forward to anything else he lines up.

Working from a script by first-timer James Villeneuve (who has one short to his name before this, but nothing else that I can see), Calahan has delivered something that's absolutely spot on when it comes to the mix of silliness and dark comedy. The only thing really working against it is the small scale of every main sequence, either coming from the script or executed that way due to a limited budget.

Evan Marsh plays Joel, a horror magazine film critic who doesn't seem to be able to find a way to diplomatically interview anyone he views as simply directing tired and lazy genre fare. We see this in his very first encounter. We also see that Joel has a crush on Sarah (Alexa Rose Steele). When Sarah returns from a date one evening, Joel decides to follow the man she has decided to spend some time with. That man is Bob (Ari Millen), and a conversation with Bob leads to a drink or two in a bar, which leads to more drinks, which leads to Joel passing out in a closet and then waking up when the bar is closed. It's not empty though, and Joel takes a seat among a group of people who turn out to be serial killers. And it's not long until Bob appears to take his place in the circle. Which puts Joel in a very sticky situation.

Having fun with some killer archetypes (Robert Maillet plays Mike, a man who seems to love killing teens in camping grounds, Julian Richings plays Fritz, who has a penchant for using poison), Vicious Fun generally manages to live up to its title. It's no big surprise to see that Joel cannot keep up the facade for long, and most of the movie involves him trying to stay alive, helped by a skilled female killer named Carrie (Amber Goldfarb). More fun comes from Joel starting off as pretty much useless, while he relies on Carrie's skillset to keep them safe, but becoming more confident as he is forced into a number of situations he would much prefer to be viewing on a movie screen.

Marsh is a decent lead, doing a good job of being weak and pathetic until he finally starts to find a bit of fire in his belly. Goldfarb and Millen are both great, playing two killers with very different views on who they should be killing. Richings and Maillet are both good fun, Sean Baek does okay with his relatively small amount of screentime, and David Koechner has what amounts to an extended cameo, but is fun when he's around. Steele feels just right in her role, and you have superb comedic turns from Kristopher Bowman, Mark Gibson, and John Fray as three cops not about to believe for one second the far-fetched tale they hear from Joel.

Although really good throughout, Vicious Fun never becomes great. That's a shame. All of the ingredients are there, with the only thing lacking maybe a bit of daring or confidence. Mind you, it is easier to be daring and more confident when you have more money to play around with. At least you still get some memorable characters, a witty script, and a few decent kills in a film that makes the most of a premise that could have easily felt too slight for a feature. 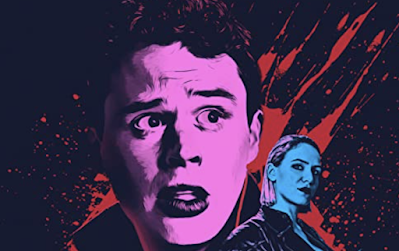