If you have yet to explore the filmography of director Thomas Vinterberg then you are in for a treat. The man has made a number of films I would consider near-masterpieces, and Another Round is potentially his greatest work, a perfect viewing experience that carefully navigates very tricky territory.

Four male friends, all high school teachers, find themselves feeling rather listless and uninspired. Which makes them keen to try an experiment based on the idea that humans should top up the alcohol level in their bloodstream to a small amount that gives them their optimum balance. It isn’t much, just 0.5% (initially), but the positive results start to tempt the men into pushing things further. Although every main character gets enough screentime, the focus often moves back to Martin (Mads Mikkelsen), a history teacher who seems to have lost himself, disconnected from his pupils and also from his wife (Maria Bonnevie).

Having now attempted to maintain a sober life for just over thirteen months (you do keep counting these things, no matter how long it goes on for), I admit that I had a bit of trepidation when going in to this. Would it make drinking seem more tempting once again, or would it pain me to see moments of self-inflicted messiness that I could identify all too closely with? Mercifully, it does a bit of both, without overdoing either.

The script, written by Tobias Lindholm and Vinterberg, investigates the central issue with a keen eye for the strange relationship that so many people have with alcohol. You get the rites of passage, you get the use of alcohol as a social lubricant, you get the times in which someone doesn’t stop the party antics until long after everyone else, and much more. But, and most importantly, you get just as much time spent with characters who are trying to recapture a certain familiar joy, crucially not necessarily realising what they have in their lives while bemoaning what is missing.

Everyone does great work here, everyone (and the rest of the cast includes Thomas Bo Larsen, Lars Ranthe, and Magnus Millang), but this is another film starring Mikkelsen that is absolutely owned by Mikkelsen. Watching him go from despondency to lively engagement with others is wonderful, watching him take things too far is worrying, and watching him dance and express every feeling running through his body without uttering a word (in a cinematic sequence that I probably won’t see beaten this year) is one of the greatest pieces of physical performance that I have seen in a long, long time. And I am not prone to hyperbole.

Considering the events that occurred just before the film was starting, a tragedy for Vinterberg that seems to have made him more determined to make things ultimately uplifting and joyous, Another Round is all the more bittersweet from start to finish. That could have also made it a difficult experience to process. It isn’t though. You can still project your own experiences and feelings over the ending, but that doesn’t stop it from being a life-affirming celebration of simply being human, and all the pleasure and pain that entails. 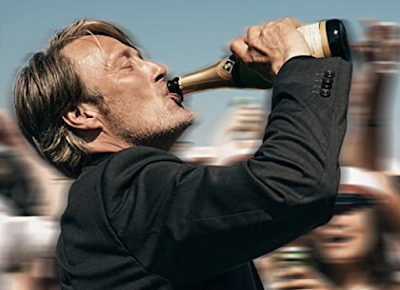