A rather simple action horror movie premise is turned into yet another film that misses the mark after promising so much. It’s not bad, but it’s just a bit too long and a bit less bloody and vicious than I wanted it to be.

Peri Baumeister plays Nadja, an ill woman who is travelling on a plane with her young child, Elias (Carl Anton Koch). Nadja and Elias, and most of the other plane passengers, have their flight seriously disrupted when the plane is taken over by terrorists. A lot of people are due to die, but the terrorists haven’t counted on a very problematic passenger. Because the “illness” affecting Nadja also makes her a formidable force when she decides that she needs to stand up and fight back to keep her son safe.

Directed by Peter Thorwarth, who also co-wrote the screenplay with Stefan Holtz, Blood Red Sky has a great central premise, and it works well with it. Nadja taking on the terrorists, and surprising them with her strength and violence, is good for a few decent moments, but when things settle down slightly the film quickly feels like it is deflating, which isn’t good to notice just before the halfway point. The action and bloodshed is depicted well enough, although more of both would have been welcomed.

Baumeister does well in the lead role, whether playing her character weak or strong, and Koch is very good as her son. The terrorists are generic baddies, with the only two standing out being Dominic Purcell and Alexander Scheer, but that is more to do with the actors than the material. Kais Setti is good as a fellow passenger. Farid, who quickly realises how the situation is twisting and turning and tries to help Nadja as much as he can.

The biggest problem here is the pacing. The big reveal in the first act isn’t any major surprise, especially if you have seen any of the marketing material for the film, and the initial enjoyment of the tables being turned soon fades to impatience, waiting to see if any set-pieces make full use of the main plot points. They don’t, and that means you end up watching the film play out while thinking of all the ways it could have done better, which makes the film seem even worse than it is.

Not really that bad, thanks to the idea at the heart of it, Blood Red Sky just doesn’t manage to feel like the fun action horror it could be. That should have been easy enough, especially when you see the moments that it gets right, but it just falls short of the mark. Above average, but this easily could have been good/great. 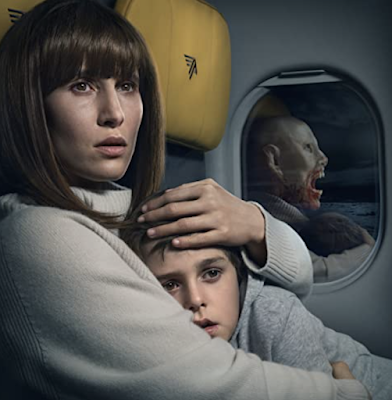