Here it is, at long last. My second Mary Millington film experience, and a vehicle that fans of the star often cite as her best work. Which makes it very odd to watch nowadays, especially when you have a scene in which a woman wakes up to find a stranger in her home and cheerily utters "oh goody, I'm going to be raped." Yeah, that really happens.

The first of three Millington movies directed by Willy Roe, who also co-wrote the script with George Evans (although they are credited under pseudonyms), The Playbirds manages to cut costs and make use of easily-available assets without slapping everything together as carelessly as something like Come Play With Me. The script may not be that sharp, few people watch adult entertainment for the dialogue and characterisations, but what is here actually works well for the plot to hit some decent story beats on the way to scenes of nudity and sex.

Edwards is a reliable performer, and Campbell does well enough opposite him. I'd even go so far as to say that Millington occasionally seems to be rising to the occasion with her performance, although she's hindered by the fact that viewers will be impatiently awaiting the time for her to get naked. Lake isn't too bad either, and Sutton makes the most of his small amount of screentime. You also get very brief turns from Windsor Davies and Kenny Lynch. They may have only one scene each, but they're very welcome appearances in between scenes featuring cast members who are much lesser-known.

Probably not one that many people will be rushing to watch, The Playbirds isn't half as bad as some other adult-oriented entertainment from this time. You still have problematic attitudes, and dialogue, but having a pot that feels like someone gave it more than a few seconds of thought it a big plus. The titillating nudity feels like a secondary consideration, which I understand many may view as a big drawback, but there's still enough to satisfy fans of the leading lady. 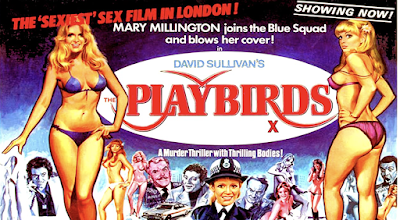