I saw the trailer for Jolt and I was immediately interested. But I was also wary. It looked like another riff on John Wick, but this time starting Kate Beckinsale in the main role. That seemed good enough to me. It turned out that it wasn’t.

With a voiceover explaining things to us, we meet a young girl named Lindy. Lindy has a condition that means she absolutely loses control of her temper when she sees anyone doing wrong. Young Lindy grows up to be Kate Beckinsale, a woman still trying to figure out how to live with her condition. The latest solution is a vest that delivers electric shocks to her system when she presses a button. It makes life harder. It certainly makes it a lot tougher to date people, and she may not make it through her first date with Justin (Jai Courtney). Justin is special though, so they end up managing more than one date. Then tragedy strikes, which means Lindy needs to embrace her rage and exact some revenge. A couple of cops (played by Bobby Cannavale and Laverne Cox) want to stop her from creating a large bodycount, and her therapist (Dr. Munchkin, played by Stanley Tucci) doesn’t want any small amount of progress completely undone.

Jolt has a decent helping of humour alongside every moment of violence. The main character has been let down by people at every turn, which adds to the inability to cure her condition, and that leads to moments that have her happily ignoring her therapy while she punches and kicks people who thoroughly deserve it.

Directed competently enough by Tanya Wexler, I guess, the problems with Jolt lie mainly with the script, from first-timer Scott Wascha. Wascha keeps the tone consistent throughout, ensuring that there’s always a sense of fun throughout, but a) the main concept is flawed, and b) the pacing is just a bit off, even if it clocks in at roundabout the ninety minute mark, which is a pleasant surprise nowadays. Having Lindy control herself with the use of the electric vest, except in the moments when she doesn’t want to stay calm, isn’t the way to set the ball rolling. What should have happened was something that would forcibly propel the character violently throughout a plot that could then have Beckinsale battling baddies while trying harder not to hurt innocent bystanders. Imagine if, for example, Lindsay had an early fight with someone that led to her being thrown against a fuseboard, electrocuted, and having the vest then malfunctioning while fused to her muscles/skin. Way more fun could be had there, and that is the first idea I came up with while watching the film play out.

Beckinsale is a solid lead, and she can do the physical stuff well, and the other big plus here is Tucci. Cannavale and Cox both do fine, although the former feels like he’s been used as a strong supporting player so often recently that his roles all seem to blend into one another (even if he is sometimes a villain and sometimes a nice guy). David Bradley is good fun in his few onscreen moments, and Courtney benefits from the fact that he’s not in the movie all that long. He’s not my favourite actor, by far, but does okay here.

Best when it is allowing the main character to revel in delivering painful justice to people who deserve it, Jolt is an easy way to kill an hour and a half. The fights are okay, the thin storyline moves well enough from one set-piece to the next, and the third act is as predictable as any slick action thriller you have ever seen. I’d watch a sequel to this, but I would also hope that lessons are learned and the sequel makes significant improvements on the foundations laid down here. 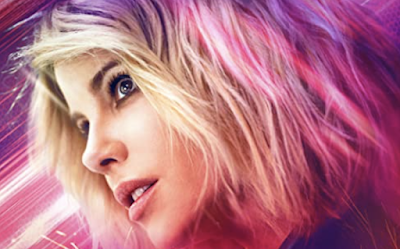