Although it may seem redundant to review any Fast & Furious movie at this point, that hasn't stopped me before. I have watched this series develop over the years, I have fallen out of love with it, I have revisited most of the entries and ended up enjoying them more on repeat viewings, and I have accepted that every instalment will have some car action punctuated by Vin Diesel looking moodily at people while he growls "FAMILY". I wasn't really looking forward to this instalment though. The main character being given a hitherto-unmentioned brother, the return of yet another character we thought was long dead, and some people being launched into space all seemed to point towards a blockbuster with the wrong ratio of dumb to fun, and the previous film had already given me my fill of that.

Surprisingly, I ended up thinking this was a blast. And I don't see why fans of the series would be disappointed by it.

The plot is, in a way, a bit simpler than some of the previous instalments. A group of baddies, led by Jakob Toretto (John Cena) are trying to get all of the components to something that can be assembled into an extremely powerful device. Once the data is uploaded to a satellite, the device could basically be used to hold the world hostage. Or simply give absolute power to the right bidder. Dom and co. set out to do what they do best, with the added complication of Jakob being Dom's brother, estranged due to events that are shown in various flashbacks throughout the movie (with Dom and Jakob played, respectively, by Vinnie Bennett and Finn Cole).

Is this absolutely ridiculous? Yes, but these films have been that way from the start. At their best, they are ridiculous in a way that is self-aware and laced with good humour. At their worst, they are ridiculous in between moments that we're supposed to view as completely grounded and earnest. Fast & Furious 9 leans towards the best of the series, and even has a theory being posited by one character that they may be supernaturally invincible, considering all of the mad missions that they've been on over the years. You could argue that the backstory between the Toretto brothers drags everything down, but it somehow works well, thanks to the younger actors and the way it is interwoven throughout the main narrative.

Director Justin Lin returns to the series, making this his fourth entry, and he also helps to write the script with Daniel Casey. It doesn't seem like too difficult a task. Get everyone together. Have some whacky driving antics. Be sure to visit some different locations (as biased as I am, I was able to overlook the strangely twisted geography of Edinburgh during an extended action sequence set there). Ensure that Vin Diesel is always the best at everything that needs doing well, be it fighting, driving, or impressing women. Job done. Having said that, as already mentioned above, some entries in this series even manage to falter while following such an easy formula. As small a detail as it may seem, Fast & Furious 9 actually starts with a car race sequence, and punctuates the action throughout with enough vehicular mayhem to keep petrolheads satisfied. That includes a conversation between Diesel and Helen Mirren that could easily have taken place in any environment, but takes place while Mirren is driving a fast car and evading police. Lin may not do as well with shooting the action, the editing has to work hard in some places, and it's all too, well, fast and furious to keep track of everything at times, but he and Casey create a solid foundation with the writing.

Cena is a fun addition to the cast, even if he never feels like a major threat, and everyone else slips back into their characters as if they were just putting on their favourite jackets. Diesel keeps himself at the centre of most of the biggest moments, of course, but Tyrese Gibson and Ludacris get to riff off one another again, Michelle Rodriguez and Jordana Brewster both feel a bit more involved with the action this time around, Nathalie Emmanuel returns as Ramsey, Charlize Theron returns as Cipher, with much less screentime, and you also get Sung Kang, Lucas Black, Mirren, Shea Wigham, and one or two others reprising their roles. Bennett and Cole are the main newcomers, and both do excellent work in the flashbacks, Anna Sawai is a formidable young woman named Elle, and Michael Rooker makes a welcome appearance.

The music from Brian Tyler may sound as if it is wanting to swell into The Avengers theme at points, but it generally works just fine in between some high-energy soundtrack choices, and it goes along with the constant momentum that the film has, moving from one over-the-top action beat to the next with just enough rest in between to allow characters to connect with one another and/or have some more exposition.

I have seen views from people who didn't like this, which leaves me bemused. You know what you're getting into with these movies. And if you know what you're getting into then I'd say that this absolutely delivers what fans want. The vehicles are cool, the fights are creatively staged, and there is so much fun involving large magnets that I expected Jesse Pinkman to join the crew for the third act. I'm already tentatively looking forward to the next instalment, thanks partly to a small mid-credits scene that you shouldn't miss, and I hope more people enjoy this one as much as I did. 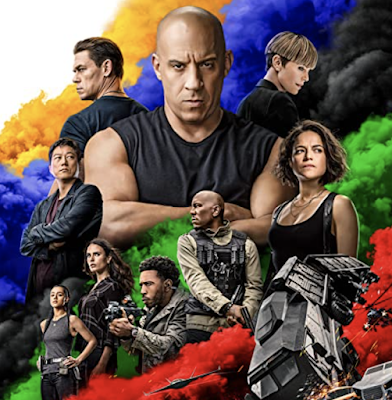