Here’s an idea. A race of aliens invade our planet, seemingly unstoppable, and the population of Earth manage to create two time portals, one in “the present” and one in the midst of the war against the aliens. The people of the future then come to our present, telling everyone that they need to enlist citizens for army duty. Chris Pratt plays Dan Forester, an ex-soldier who is now focused a science teacher, as well as a loving husband and father. When he is called up for duty, the aliens won’t know what is in store for them. Or maybe they will. Maybe the war is futile, unless Muri Forester (Yvonne Strahovski, playing the adult version of Dan’s daughter) can come up with a way to change the past.

Director Chris McKay has delivered some very enjoyable entertainment with his past few movies. The Tomorrow War wouldn’t make you remember that. It is, at best, competent. But, at worst, it drops every interesting idea in favour of brainless sequences that have Chris Pratt, sometimes teamed up with J. K. Simmons (playing Pratt’s father), fighting vicious aliens. Those sequences are perfectly fine, the action is done well enough and the CGI maintains a high standard, but they’re not good enough to remind you of the stuff not being explored.

I’m not sure if the fault lies with McKay, or with writer Zach Dean. Knowing that an alien race are about to devastate the planet and kill us all, people start to riot and act as if nothing really matters. Because nothing really matters. An interesting part of the film, dropped after being shown for about ten seconds. The whole third act, unable to avoid a major paradox, decides to just hurtle towards the end credits and hope you don’t realise how poorly plotted it is. You do, however, realise how poorly plotted it is, and not just with the time travel element.

Pratt is decent enough in his lead role, although he is much more comfortable in action man mode than he is in any of the family scenes (acting opposite Betty Gilpin, playing his wife, and/or Strahovski and Ryan Kiera Armstrong, both playing Muri at different points in her life). He does better with Simmons, but that’s mainly due to the two of them having a fractious relationship for most of the runtime. Sam Richardson and Edwin Hodge are good, playing people with two very different skill levels in the heat of battle. And you get a smattering of other supporting players who all do decent work.

If you want a sci-fi action movie that entertains then this does fit the bill. The first extended fight sequence against the aliens (weird spider-squid hybrid creatures) alone makes it worthwhile. Just be prepared to ignore anything that even hints at being thought-provoking, because it really doesn’t want viewers to think. 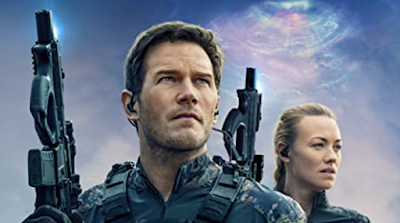