Leslie Nielsen is often thought of as one of the comedy greats. That's mainly thanks to his work in Airplane! and anything involving the tales of Police Squad (the superb, short-lived, series that led to the superb The Naked Gun films). But that success meant that he was also involved in more than his fair share of inferior work. Not that the likes of Spy Hard and Dracula: Dead And Loving It don't have their fans (with the former at least having a glorious opening title sequence accompanied by 'Weird' Al Yankovic delivering a great Bond song parody). But they're not on a par with the best films that made use of Nielsen's talents. I'm sure that one day I'll be brave enough to check out the likes of Mr. Magoo and 2001: A Space Travesty, but I think that day is a while off yet.

Wrongfully Accused is mainly a spoof of The Fugitive, but it also has time to gently mock the Mission: Impossible movies, The Usual Suspects, and Clear And Present Danger, among others. Not all of the gags land, of course, but it has a better hit rate than a lot of these movies that have been churned out over the past few decades.

Nielsen is Ryan Harrison, a man framed for murder. He knows that he is innocent, and he knows that the murderer was a one-armed, one-legged, one-eyed man (played by Aaron Pearl). Setting out to prove his innocence, Harrison is pursued by the doggedly determined Fergus Falls (Richard Crenna). He also finds himself potentially betrayed by two different women, Cass Lake (Melinda McGraw) and Lauren Goodhue (Kelly LeBrock).

It's always hard to review something like this, because it's a very simple approach to comedy, in many ways, and writer-director Pat Proft follows the usual approach of throwing enough gags around to ensure that at least some of them land. This is the only film directed by Proft, although he has written a lot of great films over the years (including, but not limited to, Police Academy, Real Genius, High School High, Hot Shots! and the best in the Scary Movie series). Proft knows his stuff, and this holds up as something that is a lot of fun for fans of all those other movies just mentioned. It may not be very clever, and a lot of the comedic targets meant that it felt a bit behind the times when it was released, but it WILL make you laugh. And that's a big plus for any comedy film.

Nielsen is fine in the lead role, doing his usual deadpan best most of the time, although he was already having a tendency to overdo the mugging and gurning at times, and the supporting cast work well with the material. LeBrock smoulders, but also happily overacts in response to what she claims is her powerful attraction to Harrison, and McGraw enjoys being the woman who may or may not get Harrison into a lot more trouble. Pearl is used as a walking set of props, basically (with the false leg, arm, and eye all used in different ways), and there are amusing little turns from Michael York, Sandra Bernhard, and a few others. Crenna is a highlight, helped by the fact that his character is never really made to act comedically while he wanders through some ridiculous situations and delivers some of the best dialogue in the film.

It will never creep up to near the top of your prioritised viewing list, but Wrongfully Accused is an easy slice of entertainment, and I highly recommend it to fans of silliness, spoofery, and Nielsen. 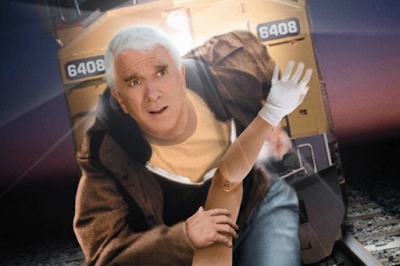