I have ended up watching a film that, yet again, makes me wonder why I do these things to myself. I watched Zoombies a few years ago and didn't bother with the sequel. Why would I? I hadn't enjoyed Zoombies. But then I saw the trailer for the upcoming Aquarium Of The Dead, a film I discovered was the third instalment of what has now become a loose trilogy of zombie animal movies. That trailer sold me on the potential of the daffy premise, so I knew I had to watch Zoombies 2, if only to satisfy my own OCD movie-viewing habits.

All you need to know about this film is that it is very similar to the first film, with the main difference this time around being that the animals affected are in a large wildlife park. The main characters are a bunch of poachers and a ranger, Brooke Sullivan (played by Erica Sturdefant). As things start to look bleak for everyone involved, it becomes vital to figure out a cure for the zombiefication and stop the epidemic spreading throughout the rest of the world.

Writer Scotty Mullen and director Glenn Miller both return to deliver another load of animal mayhem, having obviously kept everyone happy enough with their work in the first film. Well, they must have kept everyone behind the camera happy, but I doubt many other viewers actually enjoyed the end result much more than I did. Anyway, they did what was asked of them, and they repeat the formula here, with the same level of quality present in the final product.

Things start well enough. There's a zombie porcupine that I thought was signifying a much more enjoyable movie, one with more humour throughout it. That wasn't to be, however, and things soon become a tiresome sequence of dull conversations between main characters and horrible CGI depicting animals on the rampage. Those animals may be eclectic enough to stave off boredom for a while - that porcupine, a meerkat, a crocodile, a tiger, a hippopotamus, some rhinos, etc - but the special effects are so clumsy and awful that any animal attack sequences become more of a pain than a simple pleasure.

I'm not going to be as harsh on the cast as I am on the script, special effects, and uninspired direction. Sturdefant is okay in her role, and she has a number of scenes working well with the equally-capable Terra Lyons (one of the main poachers, and someone who has maybe inadvertently started an animal apocalypse). Nobody else makes much of an impression, with Jonathon Buckley and Jarrid Masse both playing very similar males who are ready to battle the wildlife, and Jumarcus Mason, Caleb Thomas, Peter Stickles, and others all looking ready to become food at any moment.

In a way, the fault ends up lying with me. I should not have expected any big step up in quality here, and the film-makers all do enough to maintain a consistent standard between the previous movie and this one. It's just that their standard falls far below mine, and that is really saying something when you consider the wide variety of cinema that I enjoy. 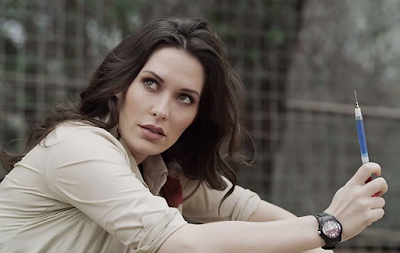