Although very much a film from director Leos Carax, Annette is also very much a film from the minds of writers Ron and Russell Mael (AKA Sparks). A strangely antagonistic and defiantly non-traditional musical about performing, about the relationship between performers and audiences, this is also a look at strong passions running between people who may view themselves as separate from the masses who flock to appreciate their talents.

Adam Driver plays an acerbic and dark comedian named Henry McHenry, a man who seems to find his unique talent dissipating when he falls in love with, and marries, an opera singer named Ann Defrasnoux (Marion Cotillard). Things are further complicated when they have a daughter, Annette, who shows signs of inheriting her mother's talent.

Deceptively light and amusing at the start of the whole thing, with the wonderful "So May We Start" a musical highlight the rest of the film never quite equals, Annette soon drags viewers into the surreal and strange style of the modern opera it hews close to. Nothing here is subtle, although a number of moments in the first half initially feel more ambiguous than anything in the second half, and almost every moment is delivered in song, even if it veers away from musicality for a while before veering back.

Carax is in his element, clearly relishing the opportunity to stage those Sparks songs in unusual settings and situations, and actually makes a lot of correct decisions for the material, including the use of a “puppet” for most of Annette’s screentime. There are one or two ingredients that feel extraneous (a sequence about women coming forward with some accusations ultimately goes nowhere, disappointingly, and one character gets to bemoan a missed chance at love in a way that doesn’t really make any impact), but he mostly delivers something that feels like the perfect result of this collaboration.

Whether you will enjoy it or not is an entirely separate thing. I was on board, willing it to challenge and impress me, then it lost me for quite some time, and then I got back on board during the third act.

Although it is both Driver and Cottilard in the lead roles, and both are more than up to the task, the film is largely carried by Driver, who is excellent and completely trusting in how the director will use his raw performance. Simon Helberg has some screentime, playing that character who missed out on love, and he does just fine, but I would have preferred the whole thing to focus simply on McHenry, Defrasnoux, and Annette.

For the performance from Driver, for the creativity from Sparks, and for the audacious staging, I cannot rate this as a bad movie. It’s not average either. But the bad onscreen almost outweighs the good, which is why I ultimately rate it only just above average. 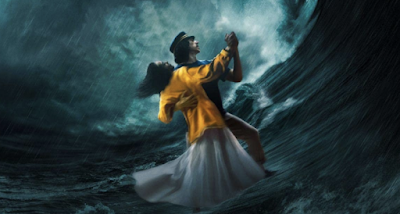