The feature film debut from writer-director Owen Egerton (who followed this up with the more enjoyable, but not necessarily better, Blood Fest), Follow is a small-scale thriller that uses that enjoyable trope of someone waking up next to a dead body without remembering how the fatality happened. It definitely won't be for everyone, basically mixing some elements of American Psycho with Les Diaboliques, but it's certainly worth watching. I'd like to think that more people end up enjoying it than not.

Noah Segan plays Quinn, a young man who appears to be very much in love with his girlfriend, Thana (Olivia Grace Applegate). But Quinn is set to move to a big city, something Thana isn’t comfortable with. She gets Quinn a very unusual Christmas gift, strangely trying to illustrate the solidity and trust in their relationship. It’s a gun. And she wants Quinn to put it in his mouth and pull the trigger. Is it loaded? It certainly seems that way when Quinn wakes up alongside Thana’s corpse. Will Quinn remember what happened? Will he sort things out? Will people stop visiting the house?

Although I cannot tell if it is intentional or not, Egerton seems to be having a lot of fun with a literal manifestation of your partner asking a loaded question. The two main characters here seem to have spent some time ignoring cracks that should have been dealt with sooner, particularly when it comes to the upcoming relocation of Quinn. And then there's his close friendship with Viv (Haley Lu Richardson), a young woman who works alongside him at his bar job. Those things don't always lead to the insanity that we see unfold here, but I think that Egerton liked the idea of taking very relatable moments from relationships and using them to take his characters to a place that none of us would want to visit. Setting it at Christmas, although it's not a focus of the film, also underlines a key concept being played with, the couples who plaster a grin on their faces and act as if everything is just fine and dandy while getting through major family events (such as . . . Christmas).

I like Segan as an actor, and he excels at somehow managing to keep you on board even while playing some repugnant characters. He's fantastic here, the role feeling quite tailor-made to play to his strengths and give him a bit of a showcase. Applegate and Richardson are also cast very well, with both given some interesting moments throughout. Although there's a very small cast, most of the main players earn their screentime. And it was a pleasure to see Don Most in a very small role.

Not only does this film do a great job with fairly limited resources, it's one that would reveal more with one or two rewatches. There's a lot to take in here, from the sly humour and metaphors running throughout it to the ambiguous development of scenes that show Segan's character trying desperately to keep a grasp on a reality that is becoming increasingly slippy. I liked this, certainly enough to recommend it to others, but I suspect I could grow to like it even more if I make room in my busy viewing schedule to watch it again. 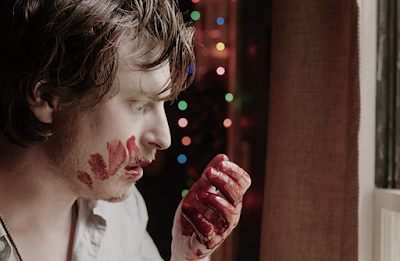