Grief can affect you in so many ways, as we have seen in various movies over the years. I very recently watched Nicolas Cage change people around him as he searched for a beloved pig, and now I have watched Jason Momoa and Isabela Merced kick ass on a quest to counter the injustice of unaffordable medication that led to the death (by cancer) of wife/mother, Amanda (Adria Arjona).

That almost sums up the plot here. After the death of Amanda, Ray (Momoa) and Rachel (Merced) want answers. Ray is contacted by someone who claims that he has information on the pharmaceutical company responsible for blocking the route to market of the cheaper medication that could have saved Amanda’s life. There’s then a death, which leads to more death, and it’s not long until the bodies start to pile up while the murky deals and corruption lead, of course, higher and higher up a chain of prominent individuals. The police are on the case, and one (Alex Scott Davis) has much more insight than the rest, as well as some more direct communication with Rachel.

Directed by Brian Andrew Mendoza, his first feature in that role (although he has been involved as a producer on some other Momoa vehicles), and written by Gregg Hurwitz and Philip Eisner, Sweet Girl is a solid, if unspectacular, bit of action with a couple of fun turns and a sadly relevant strand of commentary on the financial pain of being sick in the USA. It’s a film that doesn’t hold any real surprises, despite the fact that one or two moments are played out that way (although one reveal in the third act was nicely done, admittedly). Some may think I am being unfair by saying that, but the general structure, and fate of most of the characters, allows me to make that statement, and stand by it. This may be wearing some new clothes, but it's a very familiar framework.

Momoa is fine in his role, trying to make the most of the emotional moments in between throwing his fists and firing guns. Merced is also absolutely fine, although I must admit to being more of a fan of her Dora The Explorer work (it’s a fun film, no matter what you may assume). Davis is enjoyable in the role of  “effective, but understanding, cop”, and Justin Bartha, Amy Brenneman, and Raza Jaffrey offer decent support. Manuel Garcia-Rulfo is a highlight, playing a determined killer who is contracted to tie up loose ends.

Unsophisticated, slick, entertainment, Sweet Girl is something easy to stick on when you want to kill some time without keeping track of any majorly twisty plotting. It’s disposable, but also enjoyable enough. And the 110-minute runtime feels enjoyable brief, compared to the current propensity for these kinds of movies to rarely clock in at under two hours nowadays. 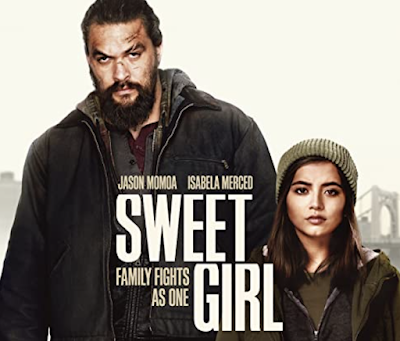