Every time another Nicolas Cage film comes along lately, I end up wondering when he will finally stop having his better onscreen moments viewed with the surprise that seems to meet every other performance he delivers recently. Yes, he still takes on more projects every year than most actors, or so it seems (well, so it seems to everyone but Eric Roberts), but he constantly does his best in them. And when the film is worthy of his best, as this one is, you get something special.

Cage plays Rob, an antisocial individual living in a cabin in the middle of the woods. It's just him and his pig, and the two do a damn fine job of finding truffles, which are collected by a young man named Amir (Alex Wolff). The whole delicate balance is upset when Rob's pig is stolen - pignapped - and Rob has to track down the thieves. He and Amir go on a journey that leads Rob to reconnect with a number of people from his past, and that means also creeping towards some memories that have been buried by Amir's father, Darius (Adam Arkin).

The first full feature directed by Michael Sarnoski, who also wrote the film with Vanessa Block, Pig is a film that requires some patience as it takes you down a path you think you know before then sidestepping any number of easy options in favour of something genuinely moving and grubbily beautiful. You may be expecting a film about a man who gets desperate and angry while trying to find his beloved pig, but you end up with a film that does more to illustrate the incapacitating and sometimes-insurmountable tidal wave of grief that can hit someone than any other recent film I can think of, with the exception of Inside Llewyn Davis.

Cage is superb in the main role. He's slightly Cage-y, but also has a lot of times when he's just creating space, moments of quiet, for others to fill. He is a man avoiding a confrontation with himself by confronting others, even if many of those confrontations are calm and non-violent ones. Wolff continues to pick decent roles in films that have allowed him to build a filmography already filling up with a great variety of interesting choices. His character may not be the focus of the film, but his own journey, and that of his father, ends up inextricably linked with Rob in a way that crystallises beautifully on the way to an ending that is, and I'm not exaggerating here, deeply moving in an unexpected, but earnest, way.

You can love someone, or something, and that can fill a huge space in your heart. And you can then be stuck with one hell of an empty feeling if you lose that loved one. Pig shows people who have that emptiness, for different reasons, but it also shows that you can work towards filling that space again. Maybe not entirely, maybe not by much, maybe just providing yourself some kind of interior cushion made up of memories that you hope will help you get through a few more days until you can figure out some other way to deal with things, or find some other distraction. If Pig managed to remind just one viewer that they're not alone in how they have ever struggled with grief/loss of love then it would be a success, but I suspect it actually reminds everyone of moments they have battled through, or at least reminds everyone that most people we know in our lives have been through, or will go through, at least one huge trauma that will irrevocably change them in some way.

If you're somehow unable to empathise, it's still a good, simple, tale of a man out to retrieve his stolen pig. 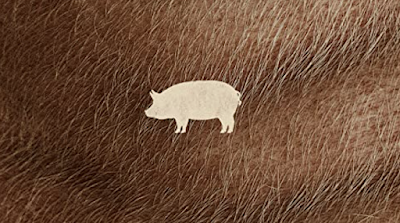