Although set in modern times, Nightbooks is a very standard fairytale premise of children who have been ensnared by an evil witch. It's a story about stories, and one that celebrates what we like about the classics we are introduced to at a very young age, from the basic moral lessons to the sheer fun of evil beings being simply evil.

There's not much time spent setting things up here. Viewers are introduced to young Alex (Winslow Fegley), a boy who has suddenly stopped writing the scary stories that he used to have so much fun with. Alex enters an apartment, drawn there by a TV screen that has The Lost Boys playing on it, and a moment later he is trapped. His captor is a witch named Natacha (Krysten Ritter), and there's another youngster, Yasmin (Lidya Jewett), being held there against their will.

Based on a book by J. A. White, Nightbooks feels like an easy hit for Netflix, although I am surprised that they didn't hold it back a few weeks, or even a month, to time the release more in line with Halloween. It's a fun horror movie that pitches things almost perfectly for both adults and younger viewers (although every parent will need to carefully judge whether or not their children will enjoy this without being too scared - the final act does ramp things up a bit).

Director David Yarovesky, who previously helmed the enjoyable Brightburn, does well enough, guided along the way by a screenplay co-written by Mikki Daughtry and Tobias Iaconis. It's very simply put together, with a few stories within the main story (as Alex is ordered to entertain Natacha with his tales), an exploration of the magical apartment, and an ongoing attempt to figure out a way to escape. The fact that the third act involves an actual "gingerbread house", an even more dangerous enemy, and a big oven underlines the simplicity of it all. It's Hansel & Gretel wandering through Tales From The Darkside: The Movie.

The production design is generally pretty good, although a middle section overuses CGI for one extended set-piece that I can't help feel would have been better with some practical effects, and there are some great uses of makeup and lighting to keep things feeling magical, spooky, and off-kilter. The music may not be great, but fans of Cry Little Sister will enjoy how that is used and covered.

As for the cast, both Fegley and Jewett are fine in their roles. They are believable and likeable enough. It's Ritter who is allowed to have the most fun though, making a strong impression from the very beginning with her mistreatment of the children she has caught. That covers the main cast, aside from a memorable cat named Lenore, although you get a few people popping up to lend support occasionally, usually in flashback scenes.

Obviously primed to kickstart a potential film series, Nightbooks is enjoyable and undemanding fun. I'm not sure if I would rush to watch a second one, but I certainly wouldn't be strongly opposed to the idea, especially if a bit more thought was given to showcasing the stories being told to keep the witch entertained. 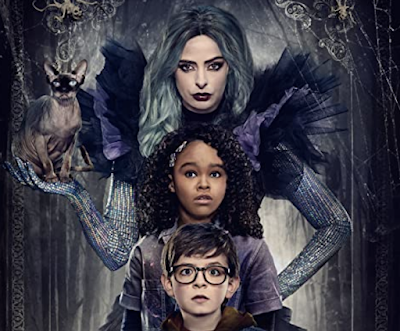