A 1980s comedy viewed as a bit of a classic from the decade, for what it aims to do, Revenge Of The Nerds holds up quite well nowadays if you can overlook some of the more problematic elements. Be warned, however, that at least one of the problematic elements is quite difficult to just shrug off, but I still think it is worth trying to compartmentalise the issues away from the essence of the plot and comedy.

Gilbert (Anthony Edwards) and Lewis (Robert Carradine) are the main nerds here, off to Adam’s College to continue their studies. Once there, it’s not long until awful alpha male types see them as another target. Because it is tradition to mock and abuse the nerds. Losing their main residence, which is given over to “the jocks”, and being pushed to, and beyond, breaking point, the nerds come up with a plan to try fighting back. They will compete against the jocks in a variety of disciplines, and hope that their smarts outweigh the muscles.

Written by Steve Zacharias and Jeff Buhai, this is chock full of stereotypes and situations that we’ve now seen in hundreds of other movies. But this was one of the earliest to do it all in a film focusing on “the losers”, and that is worth remembering. The characters are generally a fun mix, the challenges are enjoyable, and the third act is a fun up and down journey to a finale that could go either way.

It is a good job that Edwards and Carradine are just about likeable enough, although the former is more likeable than the latter, but they are helped by the fact that they are battling against some major assholes. Both of the leads really play up every potential ounce of nerdiness, probably advised to do so for the sake of the comedy. Curtis Hanson is fun as “Booger”, Ted McGinley is a suitably loathsome villain, Donald Gibb is hilariously overrun by his testosterone, Julie Montgomery and Michelle Meyrink are two very different young women who get involved with our leads (although that wording is far too polite to the way in which Montgomery is treated), and there’s a wonderful turn from John Goodman as a typical coach who will think there is nothing wrong with the “antics” of the young men who are part of his team.
Director Jeff Kanew doesn’t have to do anything fancy here, therefore he doesn’t. It’s all a case of simply setting up the main premise and introducing more characters who can be used in various set-pieces on the way to the final act, with another highlight being Bernie Casey as U. N. Jefferson, leader of an all-black fraternity that finds itself gradually supporting the nerds.
If you caught this back in the 1980s then you will probably still be a fan. Discovering it nowadays is a very different experience, but you can still enjoy the jokes that works, enjoy a lot of the characters, and spend time in the company of the entertaining clichés and stereotypes while cringing at the casual racism, casual sexual assault, and casual approach to anything that can be used as the butt of a joke. 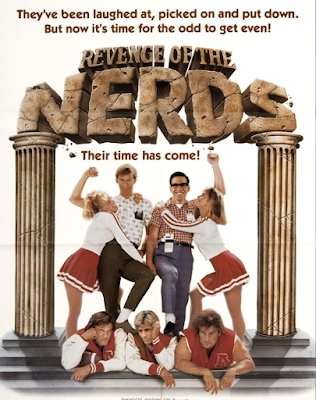