When will movie assassins learn? You cannot live that life and then be allowed to retire to a happy life. It just rarely happens, and is more often the case that the last job leads to a potential victim who the assassin perceives as a way to get a small amount of redemption. Kate is happy to follow this template.

Mary Elizabeth Winstead plays the main character, an assassin wanting to retire after one last job. Her handler, Varrick (Woody Harrelson), will be sad to see her go. But, wouldn’t you know it, things go wrong with her very last hit, a powerful target named Kijima (Jun Kunimura). It turns out that Kate has been poisoned, which puts her on a race against the clock to finish her last job, something she might be able to do by grabbing Kijima’s niece, Ani (Miku Patricia Martineau).

As I have said so many times before now, if every other film was either an Escape Room movie or a John Wick riff then I would be easily pleased. Kate is a John Wick riff, with the main character being one of the very best at what she does, which happens to be killing people.

Directed by Cedric Nicolas-Troyan (only his second directorial feature after The Huntsman: Winter’s War), this is a fairly simple film that relies on action set-pieces to help viewers forgive the mass of clichés. And it works. The set-pieces are pretty great, especially an extended firefight/chase sequence that showcases the physical skills of everyone at about the halfway mark. The fact that this comes along soon after a sequence that shows Winstead as a formidable force tearing through a building full of gangsters who might have information she needs means you never feel that the main character is incapable of getting her revenge. She may be hurt, and weakened, but her intelligence and tactics help her to maintain an edge, even against overwhelming odds.

Writer Umair Aleem (who previously did Extraction . . . not that one) does a great job of sketching out the main characters, positioning the lead perfectly between wounded woman seeking that oft-sought redemption and superwoman, and uses a lot of familiar elements in a way that feeds nicely into the satisfying, and bloody, final act.

Winstead is excellent as Kate, compensating for her slight build with moves and viciousness that make her a very believable killer. Harrelson has fun in his supporting role, even if he is barely present for most of the middle section. Kumimura is strong and noble, Tadanobu Asano is his second in command, which makes him a potential threat to everyone around him, and Martineau grows nicely into her role as the film drags her along on a journey that features some touchstones recognised by Winstead’s character.

The soundtrack is very energetic, there are a lot of neon-lit action sequences (Japan makes a great backdrop for the main sequences), and the stunt team do a fantastic job of taking the hits and co-ordinating fights that should easily please every action movie fan. 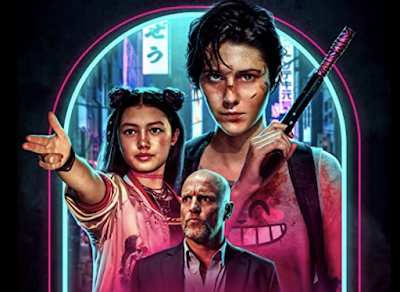