The third instalment in this particular selection of Mummy-centric tales, focusing on heroic Rick O'Connell (Brendan Fraser) and his family, is pretty much what you'd expect it to be, considering the turnaround behind the cameras. It's now Rob Cohen directing, and the writing duties have been taken over by Alfred Gough and Miles Millar, but the central concept is still all about someone wanting to come back from the dead and take his place as a beloved warrior and leader.

There's an opening sequence that explains who the new villain is this time around, the titular Dragon Emperor (played by Jet Li), and then it's time to catch up with the O'Connells once again. Rick is sort of content, but also kind of bored, while Evelyn (Maria Bello replacing Rachel Weisz in the role) seems to be just fine about a life where she's not being put in mortal danger every so often. Or maybe she's just better at keeping up a pretence. Young Alex (Luke Ford) is now old enough to be gallivanting about on his own adventures, which is why he is in Shanghai, as is his uncle, Jonathan (John Hannah). The whole O'Connell family soon ends up in Shanghai, and they end up having to work hard to stop the resurrected Emperor from becoming immortal.

Fraser, Li, Bello, Hannah, Michelle Yeoh, and Isabella Leong, and even Liam Cunningham, all do pretty good here, in relation to the script that they have to work with. It's a messy film that wants to recapture the spectacle of the previous movies without slavishly repeating any of the set-pieces, but it ends up falling flat. I'll put a small part of the blame for that on Ford, playing the youngest of the O'Connell clan. Whether it's a weak script that he can't overcome or just his own inability to emanate any sense of real charisma, Ford is the least of the cast members onscreen here, and that is a problem exacerbated by the way in which his character is foisted upon us as if he could somehow become a natural successor to Fraser's character. I'm maybe being a bit unfair to Ford here. He's certainly not terrible, but he cannot overcome the failings of the script in the same way that everyone else can, because we already know, and already like, most of the other main players.

Gough and Millar obviously wanted to work with a certain structure, but also wanted to keep things at a certain distance from the previous two movies. They want to deliver a nice, comforting, helping of filmic fun that is the same . . . but different. Unfortunately, they completely forget to add the actual fun. Even the fact that the villain doesn't really have any seriously misguided motive for his actions, other than his selfishness, brings everything down a notch. You don't watch this movie for the script, or direction. You watch it to enjoy some of the stars, mainly Li and an underused Yeoh.

Cohen can be a dependable pair of hands for this sort of thing, but he doesn't seem to have any enthusiasm for this story. The plotting has a number of predictable moments you have to trudge through, the set-pieces have their entertainment factor hidden by horrible CGI and cack-handed editing, and any amusing calbacks to past events in the movie series just make you wish that you'd spent your time revisiting the previous films.

It’s a shame that this ended up being the end of this series (although there are a good number of separate The Scorpion King movies by now) because it almost turns the entire trilogy into a warning to others, perfectly illustrating the standard law of diminishing returns for this kind of stuff. I hope to never watch this again, but the completist in me is happy enough that I finally marked it off the list. 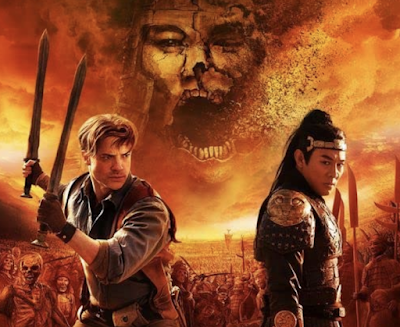