Writer-director Kay Cannon has a number of films to her credit, but is arguably best known for her work on the Pitch Perfect movies. I enjoy the Pitch Perfect movies, despite them generally going along with the usual rules of diminishing returns. So I went into this new version of Cinderella with a sense of optimism that many others lacked. Even when the bad review started to appear, I tried to have a little faith in the idea that I would be simply entertained. That faith didn’t take long to start dissipating.

Cinderella isn’t terrible, not all of the time anyway. It’s just often not that good, and then some sequences get worse than that. And you have to tolerate small appearances from certain cast members that I just keep finding less and less tolerable each time I see them.

I won’t summarise them story. I cannot help you if you don’t know about poor Cinderella already. The titular character is played here by Camila Cabello, the Prince is played by Nicholas Galitzine, and the cruel stepmother is played by Idina Menzel. Pierce Brosnan, Minnie Driver, and Tallulah Greive are the other royals, Billy Porter takes on the fairy godmother role, although it is reworked slightly, and British panel shows were robbed to place Rob Beckett, James Acaster, Romesh Ranganathan in amongst the fairytale antics. And James Corden gets some screentime, unfortunately.

Mainly placing itself in that specific category now known as “jukebox musicals”, Cinderella starts off well enough, with an enjoyable mash-up that includes the excellent “Rhythm Nation”. It’s a shame that the rest of the film doesn’t do as well, with most of the other song choices being mistreated by their rearrangements. A Queen song is murdered, an En Vogue song just reminded me of their appearance in Coming 2 America, and the less said about “Seven Nation Army” the better.

Cannon knows what she wants to present to viewers, and she delivers something obviously straining to blend the modern and cool with all of the traditional fairytale moments that you expect. This is olde worlde antics with modern sensibilities laid over everything, but it doesn’t work as well as it could.

A big reason for that is cast. The “old guard” have a lot of fun in their roles, particularly Brosnan and Driver, but the leads fail to convey any real sense of them actually enjoying themselves. I don’t like the singing style of Cabello (all whiney, quivering, use of five syllables in words where two are present) and she doesn’t have the right presence to hold your attention in the non-singing parts. Galitzine is no better, lacking charisma and unable to sell either the heart or humour in his main scenes. Porter is fun in his small amount of screentime, which is really just one main scene, and Maddie Baillio and Charlotte Spencer raise some smiles as “the ugly sisters”, but it must be said that the British personalities don’t get enough to do, so are just there to prompt thoughts of “oh, look who it is” when they appear. At least Nandi Bushell also gets to join in with the fun for all of two seconds.

Fairytales have been adapted and twisted so often over the past few decades that you are spoilt for choice. Almost all of the other movies you could think of, right now, are better than this. It isn’t absolutely terrible. It is just a mess that consistently feels like it is trying to hard to be clever and cool, while rarely managing to be either. 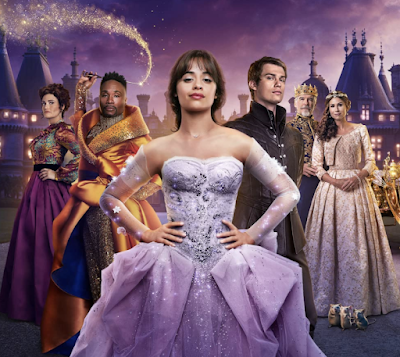