With a talented writer and director having fun with their material, Unhinged would have been a decent enough thriller for film fans to enjoy easily enough. The addition of Russell Crowe in the lead role, giving a performance as gleefully psychotic as any I can think of, makes it even better, turning it into something that feels surprisingly unmissable for this particular subgenre.

Essentially, this is a “*insert noun* from hell” movie. Crowe plays a character who is having such a bad time, apparently, that his only solution is to kill some people. And with that killing done, he is sitting in traffic, and zones out while a traffic light turns to green, when he is given a horn honk from Rachel (Caren Pistorius). Rachel is late, a bit stressed, and also has her son, Kyle (Gabriel Bateman), in the car with her. Thinking that she is having a bad day, the man she upset with her horn honking becomes determined to show her just how bad her day can get.

Director Derrick Borte has an interesting filmography that includes Cat Run (very enjoyable stuff) and The Joneses (excellent). He doesn’t seem drawn to any one genre, but rather seems to simply react to material he thinks he can treat well. Carl Ellsworth, on the other hand, definitely feels comfortable writing thrillers, having also worked on the excellent Disturbia, Red Eye, and the remake of The Last House On The Left. Ellsworth knows how to make the most of a cracking concept, and both he and Borte do superb work here. Because the unique aspect to this movie is the fact that Crowe’s character gives absolutely zero shits. He doesn’t care who seems him acting like a psycho, and doesn’t care who else he has to hurt by his one-man tsunami of violence and pain.

Crowe is more than up to the task when it comes to being intimidating, vicious, and also playing things in a way that feels very darkly comedic. Pistorius is a solid lead, starting off bewildered by the sharp turn of events before accepting the madness and digging deep to find extra reserves of strength. Bateman is a decent child actor, there’s a great little scene for Jimmi Simpson that underlines just how dangerous Crowe’s character is, and Austin P. McKenzie, Juliene Joyner, and others do a good job portraying likeable individuals who could very easily become unable to continue breathing due to the actions of one madman.

If this had gone along the same lines of many other films we have seen like it then Unhinged would not be as memorable as it is. It goes from zero to one hundred within the first few scenes, and that makes it a memorable viewing experience. It allows the film to feel different from others in this subgenre, despite heading to the same third act. And I like to think that some candy cane scissors owned by the lead character were a nice nod to another superb thriller about a vicious psycho behind the wheel of a big engine.

Highly recommended. In fact, you will be mad at yourself if you dismiss it as something not worth your time. And the fact that it's a nice and well-paced 90 minutes (something becoming increasingly rare nowadays) is another reason to recommend it. 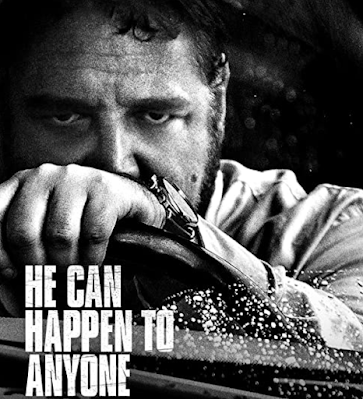