With Jerry Zucker in the director's chair and a whole load of talented comedic performers in front of the camera, Rat Race certainly sets itself up as a film that wants to be in the top tier of modern comedies. The fact that it isn't, and the fact that it fails by such a large margin, is as surprising as it is disappointing.

The main premise is very simple, and very similar to another whacky comedy from decades ago, one that made use of an all-star cast. A group of people are selected to participate in a race to a locker some distance away. The first person to get there will get to keep the contents of the locker. $2M. It's that simple. Yes, this is basically a reworking of It's A Mad, Mad, Mad, Mad World.

There are moments that work in Rat Race, and some of those moments provide some hearty laughs. Jon Lovitz and Kathy Najimy bundling their two kids into a car that once belonged to Adolf Hitler pans out pretty much as you think it would, and is a real highlight, and there's a fun cameo from Kathy Bates, playing a woman obsessively trying to get people to buy one of her squirrels. A bus full of Lucille Ball fans also provides some fun. But there are so many other moments that either don't work as well as they should or just don't work entirely. The characters played by Seth Green and Vince Vieluf don't work, and neither do those played by Whoopi Goldberg and Lanei Chapman. Breckin Meyer and Amy Smart are helped by the script, although hindered by the fact that they're, well, Breckin Meyer and Amy Smart (to be fair, Meyer isn't as bad as Smart . . . but few actors are). Cuba Gooding Jr. is just fine, as is Rowan Atkinson, and John Cleese is helped along by super-white, larger, teeth to define his character.

Perhaps hampered by the script from Andy Breckman, Zucker feels like he could have been replaced by anyone in the director's chair. There's no sign of someone monitoring quality control, there's no sign of anyone taking on the responsibility to make the best of every comedy moment. All you get is a star vehicle without any big enough stars, but it's also very much a time capsule from 2001. From the cast to the plotting, despite it hewing so close to that 1963 movie mentioned above, and to the inclusion of Smash Mouth in the finale (not just a song, they get to make a cameo appearance and interact with all of the main players).

While it's not a film I'd recommend to anyone in the mood for a modern comedy, it IS a film I'd recommend to anyone looking for some easy entertainment that keeps throwing enough at the wall that one or two bits should stick. You can find a multitude of better comedies out there, but this is for people who want some recognisable faces and a general sense of familiarity (Atkinson, for example, is doing little more than a Mr. Bean act with an accent on top of his usual schtick). Passable enough. Just not often very good. 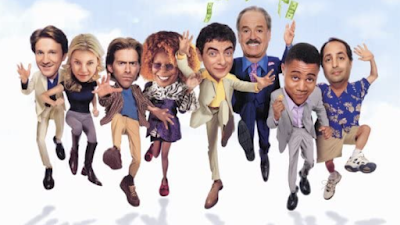