As some may have noticed, I tend not to ever go out of my way to join in with things like "52 movies directed by women" or other ways that movie fans seek to make up for the imbalance that works against females in the movie industry. This isn't any bias on my part, and it's certainly not me trying to say that "it shouldn't matter who is directing, as long as it is good" as an excuse to go along with the status quo that has men still getting the bigger opportunities, whether they succeed or fail. There is some truth to that, however, and why I have never taken on any mission to see more movies directed by women is simply because, well, I do my best to consume SO many movies every week that I thankfully end up watching a lot more movies from female film-makers than the casual film fan. This here blog has a review on it every day (so that's 7 films a week), I watch between 2 and 5 films for the podcast, and I have, for the past few years, done my best to keep up with every movie that appears daily on the MUBI streaming service. It may be the latter that exposes me to a much more interesting variety of film-makers, but this Shudder selection for this week has shown me the impressive talent of writer-director Ruth Platt. Considering how impressed, and moved, I was by Saint Maud last year (the astonishing debut from writer-director Rose Glass), not to mention the emotional punch packed by Tigers Are Not Afraid (from Issa López), I felt that it was time to remind others of how much excellent work has been done recently by women mixing horror with sadly identifiable traumas.

Martyrs Lane focuses on young Leah (Kiera Thompson), a girl who lives in a large vicarage. It's a busy environment, but can prove to be an equally lonely one for a young child. Leah feels disconnected from her mother, Sarah (Denise Gough), and her father, Thomas (Steven Cree), is more comfortable discussing aspects of faith and spirituality than being a relaxed father. Then there's the older sister, Bex (Hannah Rae), who likes to torment Leah. The dynamic could feel very normal, a standard family that often has members rubbing each other up the wrong way, but there's something a bit off, something that nobody seems to want to address. Leah finds herself receiving visits from another little girl (played by Sienna Sayer), and the conversations between the two of them may end up laying out the problem at the heart of the family that nobody wants to discuss.

Although a tale of a mother and her children, Martyrs Lane stays focused on the viewpoint of a young child. It's a great approach, with Platt convincingly creating moments that will be familiar to anyone who had strange sensation of walking in on adults who you know had just been arguing with one another, or had been discussing something not to be spoken about within earshot of the kids. That's what this is, essentially, but that feeling is also wrapped in a layer of something that evokes loss and grief, but without young Leah being aware of what others are missing. As she gets closer to discovering the truth, helped along by her new friend, she also reminds her mother of pain that was barely being held back by the smallest of dams.

All of the cast are superb in their roles, and all play things perfectly. Gough and Cree are flawed parents who feel absolutely real at all times. Rae is the typical older sister, with her own teen turbulence distracting her from the bigger picture for most of the runtime. But the heart of the film lies with Thompson and Sayer, and both give performances so good that I hope other directors can figure out ways to keep making the most of their talents. Both are very natural, but Sayer has to act up a little bit more, playing her character as she is, someone wearing a costume/mask who wants to be completely honest with others, but fears the full repercussions.

Perhaps a little bit undecided on tone and look throughout, Platt nevertheless makes the right choice in being committed to keeping most of the film as events observed by children. Would I have liked a more gothic style? Would I have enjoyed a few more moments of creepiness, some actual scares? Yes. This isn't a film to watch if you're after some standard jumps and a bit of bloodshed, but it could have added a little bit more of either without losing its way (as far as I can tell). Platt clearly had her mind set on the way to best tell this story, however, and it's hard to really fault an end result that feels as if it accomplished everything she wanted.

I was enjoying Martyrs Lane while it was on, especially when I realised what kind of film it was, but I was a little bit in love with it by the third act. The ending may be a bit too unambiguous for some, especially after the dreamy quality of many moments in the first two acts, but it worked for me. As the end credits rolled, accompanied by some more of the lovely music provided by Anne Müller, I knew it was a film I would have to hastily recommend to others. I suspect few will like it as much as I did, but I'll be happy if one or two others share my view. 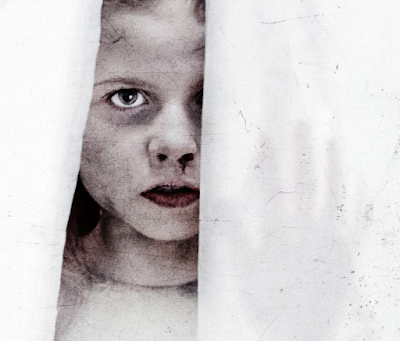